A scientific project designed to determine whether a boat-shaped formation in eastern Turkey contains the remains of Noah’s Ark.

In 1959 a NATO aerial survey was being conducted in eastern Turkey. While studying the photos from that survey a Turkish army captain by the name of Ilhan Durupinar spotted an unusual boat-shaped object trapped in a mud flow on the side of a mountain about 12 miles south of Mt. Ararat. Bringing this to the attention of his superiors, it was not long before the news spread to the United States and an expedition was mounted to explore the site. The story of that expedition to the site (which was named “Durupinar” after the Turkish captain) was published in “Life Magazine” in September 1960.

Although several individuals on the 1960 expedition disagreed, the site was declared to be a strange natural formation. It was soon forgotten by the world. However, it did capture the interest and imagination of a young Ron Wyatt who 17 years later traveled to the site and began what became a 10-year investigation. In June 1987, based on Ron Wyatt’s research, which was submitted to and approved by Turkish scientific authorities, the site was declared to contain the remains of Noah’s Ark. The surrounding area was set aside as a national park and a visitors center was built.

That was when the problems really began. The mainstream scientific community was not about to let this declaration go unchallenged and they immediately began a public relations campaign to marginalize Ron, the Turkish declaration and anyone that researched the site and gave a positive report. Criticism also came from a certain segment of Christian leaders and scientists who had a vested interest in the Ark being found on Mt. Ararat, not some mountain 12 miles across the valley.

These groups played very successfully on the fact that Ron and most of his “helpers” were not professional scientists and as such their research was declared to be invalid. They also accused the Turkish authorities of simply making their declaration in order to increase tourism to the area. They would not accept the findings of the Turkish scientists. Because of the influence the mainstream scientific community has on government and the media, they made it appear to the average person that the whole thing was an elaborate hoax. 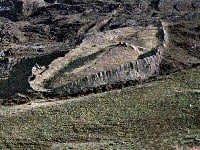 Today most people are not aware that the Durupinar site is the only place where evidence of Noah’s Ark has been found. At the same time, scientific and Christian groups still continue to raise funds to climb Mt. Ararat to search for the Ark!

In June 2000 Bill Fry, president of Anchor Stone International, traveled to eastern Turkey to determine whether the recent change in the political climate in Turkey might make it possible to began a new study of the Durupinar site. Since that time Anchor Stone has worked to put together a group of professional scientists and researchers who will for the first time take an honest scientific look at the evidence.

It has taken over 4 years but through our continuing efforts Anchor Stone has made application and been told by Turkish officials that our permit to begin a geophysical survey of the site will be approved. It is projected that work will begin this summer. Our work will be done through two American universities coordinating with Turkish government and scientific authorities. One of two contracts for the work has already been signed.

The Durupinar project will be done in two phases. Phase One will be a complete geophysical survey of the site and the immediate surrounding area. Phase Two will be an archaeological excavation of the formation and certain spots within the surrounding area. A geophysical survey of the site first is vital to the success of any excavation. Without knowing the exact nature of the remains before we begin to dig, we may find too late that certain digging methods would destroy certain parts of the remains. We will only get one chance to do this. We want to do it right.

With this new data we will be able to show that there is valid scientific evidence for this being a man-made object that has numerous features consistent with the expected remains of Noah’s Ark. This will go a long way towards removing the obstacles that critics of this site have erected over the last two decades. With this evidence from the first part of Phase One we should be able to get permission for the rest of the project as well as raise the necessary funds to pay for it. Estimates at this time are that the cost of the entire project will be about $6.1 million. Here is the breakdown.

Although these are quite large numbers, as was stated earlier, the first part of Phase One is projected to cost only about $100,000. We already have about 85% of that on hand and are expecting to raise the remainder over the next 4-5 months.

We are proceeding in this way for a very good reason. There have been so many hoaxes and false claims about Noah’s Ark over the years that most people roll their eyes and chuckle when you try to talk seriously about “finding Noah’s Ark”. Couple this with the negative public relations campaign that has been aimed at this site and you have a situation where it is virtually impossible to raise funds until we have some professionally produced scientific evidence. With credible data in hand we can make our case and I believe have success. That is not to say that the mainstream scientific community is going to just jump on board, but it will make it much harder for them to credibly criticize and ignore our project. Maybe for the first time millions of people will have to consider reevaluating their view of the Bible.

At this point we need your help. We need to raise another $15,000 immediately to get this initial testing done so that we can move forward. This is the first time that a permit has been available for this work in almost 15 years. We now have a clear prospect of getting this site excavated. We must not let this window of opportunity close.

Anchor Stone is estimating that we can have the entire project completed inside of 2 years if we move forward now. We cannot do this without your help. Please seriously consider being a supporter of this project.

Story Behind “Battle for the Firstborn”

What is going on with Noah’s Ark Project?