IN SEARCH OF NOAH’S ARK, Part 2 — Arrival in Ankara

ASI Note: Noah’s ark and the Ark of the Covenant are making the news lately.Â  This is part of a series in Baptist Press about a trip made in search of Noah’s Ark.Â  The article does NOT necessarily reflect the viewpoints of Anchor Stone International, it’s reproduced for information purposes only.

CHUCK: In Frankfurt, Tom and I catch a flight to Ankara, Turkey. We are going to eastern Turkey with hopes of videotaping Mt. Ararat and doing some research on those who have searched for Noah’s Ark. My excitement and anticipation are high. Although we are seated in separate sections of the plane, Tom and I both are thinking about what’s to come and praying for guidance and direction on this expedition. 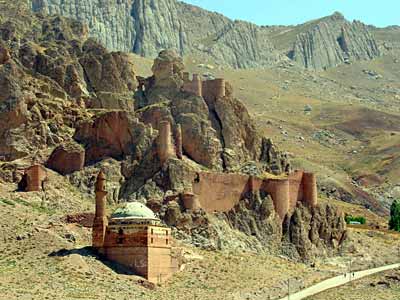 Ruined strongholds
Ancient fortresses dot the landscape of the Turkish countryside. Bastions from the Hittite era date before 900 B.C. The fall of that empire led to the rise of the Urartu kingdom, which lasted more than 300 years. Photo by Chuck Hughes

Ten hours later, we arrive at the Ankara airport, collect our considerable number of bags and join the long line to get our passports stamped. Off to customs inspection!

We have some pretty sophisticated camera equipment, packed in several cases, plus a satellite phone and laptop computer. Thank God, Tom had prepared the necessary paperwork stateside, but I notice we seem to be drawing a lot of attention. With only two bags, I’m allowed to pass through with little difficulty, but Tom is another story. The customs agents ask him to move the equipment to a special area to be searched. One of the cases is a bit unusual: a four-foot, octagonal container that holds the camera tripod. It could be perceived as some sort of armament case.

While I wait for Tom, I notice a gentleman with sandy blonde hair wearing a light brown business suit, standing out amongst the predominantly darker complexioned travelers. He is speaking into his cell phone in a language I don’t recognize. I make a mental note and watch him enter the reviewing area through an “authorized only” entrance. Fifteen minutes later, Tom comes out of customs. After what he’s just experienced, he is doing a good job of keeping his composure.

TOM: “That wasn’t so bad,” I tell Chuck. It quickly becomes apparent that you are not in the good old USA anymore. The two Turkish customs agents made me feel like something right out of an old movie. They would say something to each other in Turkish, point at the camera gear behind me and walk by me — looking me up and down. They asked me for my passport, looked to make sure I had the proper visa and wrote down some numbers, then gave me the proper stamps and sent me on my way.

I think I was in there no more than 20 minutes, but I thought my flight over the Atlantic Ocean took less time. They appeared to be satisfied. I said a silent prayer of thanks and made eye contact with each one of them, using my newest Turkish word — the one for “thank you.”

CHUCK: We load the camera gear and our bags into a small Euro-style yellow cab. It was a little tight, to say the least! Somehow, we manage to fit everything inside and our driver sets off across what seems to be the scenic route through Ankara. It takes at least half an hour to get to our hotel, which supposedly is near the airport. There’s a little confusion about the charge when we try to pay for the ride, and I tell Tom it looks like our first cab ride in Turkey might have paid for the driver’s vacation.

We get a chuckle out of that, and the edge from the long trip lifts a little. We finally unload our gear at the Best Western Hotel Ornek’e. It’s obvious we will be the only Westerners at this Best Western. Ah, first class all the way! What an American treat! Had I been blindfolded before I stepped inside, I would never have known I wasn’t on American soil.

TOM: I joke with Chuck that we are in a pretty fancy Best Western, even if we did find out that American Express isn’t accepted everywhere (or was that Visa?). Yesterday, I was too tired to think, but by morning even that has cleared up. Amex is oddly accepted, when it wasn’t the night before. The feeling of calm I had in Atlanta has stayed with me. I wasn’t trying to feel the inner confidence; it was just there. I knew it was faith — the confidence of my faith. And in an odd way, I find myself looking for signs.

Things had really gone very smoothly in customs. Even though I had to answer questions, I was answering them honestly and hiding nothing. Whenever a so-called problem crops up, it seems to solve itself. I am in awe. It’s almost a reverent feeling. I talk to Chuck about it, and we agree that this expedition would be at all times guided by the Lord’s hand. Our brothers and sisters who support us stateside share this with us. I’m confident we have the tools to complete what God wants us to do over here.

But what is it? What does God want me to see? Why is it my turn?

I’m introspective as I prepare the three-man crew for our journey. I’ve prayed that God would help me and the people around me, to bless us with His power and wisdom to fulfill the task He has set for us. He has blessed me so many times before. Why has he brought me and my dear friend Chuck to Mt. Ararat? What information or revelation will I find? And will we return safely home with any knowledge of the Ark? What’s so different from the hundreds of people who’ve passed this way before?

I’m experiencing a spiritual emotion; Chuck is experiencing it too. But I need to keep the reality of it in focus. We’re here to do a job, representing a lot of people and their trust that we’ll document our journey.

Well, tomorrow’s another day. I’m well aware that I need to keep an eye on our expenses. Who knows what to expect in Erzurum or Dogubayazit — the outlying cities at the foot of Ararat. We’re anxious to get started, and we’re just in Ankara, Turkey’s capital city. Our real journey begins 18 hours from now.

Since we have a long layover in Ankara before our flight to Erzurum tomorrow afternoon, Chuck and I decide to check the operation of our gear. I have to learn how to operate the laptop computer that was loaned to us, but the battery isn’t holding a charge any longer than 10 minutes. I check the power converter about the same time it makes a sputtering noise and sets off a slight odor. Chuck and I eventually figure out that the cycle of the electric current in Turkey is slightly lower than in the United States — enough to make a difference.

We don’t have a Plan B for this, so we can’t do anything but laugh out loud.

NEXT: What if the stories are true?