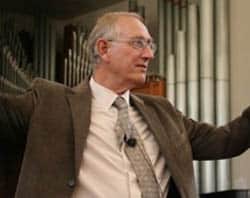 Thursday Veith discussed the adaptation of animals from a plant-based diet (Gen.1:30) to a meat-based diet. Assuming what the Bible says about the diet of animals is true, it “seems ludicrous if you look at everything in the world today,” Veith said. He discussed several examples of animal transformation caused by environmental changes. Veith’s article on the same subject is referenced below for the sake of summary:

Thorns and spines are really just stems and leave that have modified growth processes. There is no new information here, just a modification of the existing pattern.

Transformation could have occurred in bacteria, causing the development of disease organisms. Originally, bacteria could all have had highly specific roles to play in assisting numerous processes in the body and in the environment, just as useful bacteria still do today, and their original role could have been only beneficial.

Sacculina, a parasite of crabs, has no digestive tract. Instead of maturing into a normal barnacle, it is transformed into a blob of cells. The loss of organs is not necessarily the result of mutations, but could just be the result of deactivation of the gene systems that are not required under the new circumstances. The venom of snakes and spiders may simply be modified digestive proteins.

Carnivores are equipped with the necessary weapons to kill and catch other animals, but this equipment need not necessarily have been designed for that purpose.