At Last! They Reached the Boat-shaped Object

They had to climb over rocks and crawl through crevasses to reach the earthen wall that had been identified on the aerial photograph as the probable side of NOAH’S ARK.

At last! They had finally reached the object. Now they could know for sure if this was Noah’s Ark. Or could they? Dr. Brandenburger and Captain Ilhan unpacked the field equipment while others scouted for the right spot to dig. With hand tools borrowed from the local villagers the first trench was dug.

You could see the disappointment on some of their faces. The bits of dirt and stone bore no resemblance to what was expected. They expected petrified beams and timbers. Time passed slowly, but no discoveries were made. Some pointed out that they might be at the wrong spot. One of them commented, “If these long heaps of dirt are formed this way because of the presence of an actual ship underneath, then we should have come to it by this time. Nothing of any archaeological value has been discovered thus far. It doesn’t seem right.” 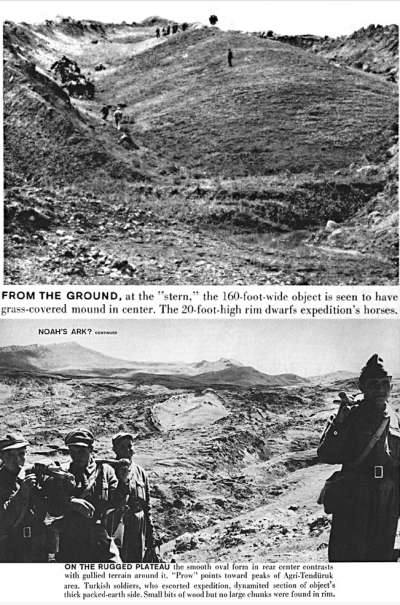 Many in the group felt the same way. A second trench was decided upon but nothing was found. Also, the 15 foot high side revealed nothing so they decided to retire for the evening. The next day they tried a different technique. One in the group asked Major Baykal if he had any dynamite. He said no but they had plenty of black powder. So it was decided to blow a hole in the side of the object. The team’s archaeologist strongly objected to this unorthodox technique but the rest felt there was no alternative. They were running out of time.

There was a tremendous explosion. A large hole was blasted into the side of the object. Again, all that was found was dirt, rocks, and more, you guessed it, more dirt. It was approximately noon on June 7, 1960 when the team leader exclaimed, “Let’s go home, folks, it’s finished.”

What a bunch of discouraged and sorrowful humans walked down the slope that day, back to the spot where the horses waited. Two days later they were back in Ankara where the expedition was pronounced finished and the following release was issued to the assembled journalists:

“With the full permission of the new government, an investigation team sent to eastern Turkey by the Archaeological Foundation of Washington, D.C., has just returned to Ankara after completing its study of a large boat-shaped object that appeared in an aerial photograph made by the Turkish army.”

“The team under the leadership of Mr. George Vandeman, located the object twenty miles south of Mount Ararat near the Iranian border, Captain Ilhan Duripinar of the Turkish cartographic service, who originally discovered the peculiar shape in the aerial photograph, was a member of the group.”

“Dr. Brandenburger, photogrammetry expert of the Ohio State University, foremost member of the team, stated, ‘Our measurements in the field verify our laboratory findings. In my opinion further study of this peculiar symmetrical phenomenon should be made by an expert in tectonics.'”

“The team found a landslide on a gentle mountain slope. Earthen walls within the slide were apparently pushed into the shape of a boat. There were no visible archaeological remains.”

“Mr. Vandeman concluded that ‘the mission was scientifically successful. We located the site and made our measurements. We identified the supposed object and ascertained to our satisfaction that it was a freak of nature and not man-made. It is of no further interest to us, so we shall not send an archaeological expedition into the area'”

So, officially it was over. But was it? In a confidential report to backers and members of the expedition, George Vandeman admitted: “It is possible, however, that our conclusions at the time were more negative than they should have been. Some in the group are not convinced that we have fully explored the possibility that something may be buried beneath the site that may have caused that portion of the earth to remain so symmetrical and boat like a formation. Dr. Brandenburger writes me under date of June 24, 1960:

“Meanwhile I have received my developed colored slides of the ship-shaped object formation, and I still must say it is an amazing feature. In any case it will be very difficult to explain its existence from the geological standpoint.”

“I showed the slides to some of my friends, and they were of the same opinion. It is doubtless a mystery, and I come always more to the conclusion that our official statement to the press was too negative. The interpretation of the formation is of utmost difficulty, and I am not anymore so sure that, from a serious scientific standpoint, a sole surface archaeological investigation of only two days entitled us to state that the formation is not the ark.”

Wow! They really had some doubts about their original conclusion didn’t they? I know that was a long dissertation but I wanted you to get a flavor for what was going on back then in June of 1960 because it has a bearing on what I will be sharing with you in the future.

In September of 1960, LIFE magazine had an amazing article on the June expedition. That article would change forever the way people would view NOAH’S ARK. I have acquired an original copy of that magazine and it is fascinating to read. I can’t remember reading or hearing about this when I was in the 10th grade but maybe some of you do. There was someone who did read this article in LIFE magazine and he would become instrumental in verifying that this site was truly NOAH’S ARK! 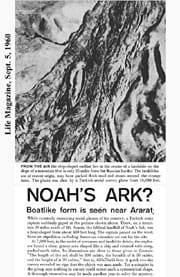 And that’s a “Closer Look”

We will share with you in our next article who that person was and the events that led to the discovery of “Noah’s Ark”. DON’T FORGET to check out the rest of the web site. Please visit the “ASI Partners” section in the main menu. Maybe you will be impressed to support this work.

4000-year-old Remains Unearthed beside Manjil Dam Fifteen Years of Research Down the Drain?