Because a number of questions have been raised recently, we are making available material that previously has been withheld. The following material and the facts that they support and corroborate are now in the public domain and their release no longer represents a breach of any previous agreement. This information has been posted with the permission of Wyatt Archaeological Research.

Unlike Ron’s other discoveries (Noah’s Ark, Sodom & Gomorrah et al) the Ark of the Covenant has always suffered from a lack of hard of evidence. This is not because evidence doesn’t exist but because it has been withheld in light of necessary agreements made at the time the excavation began and later as it progressed.

True to their pattern, Ron’s critics have taken advantage of this lack of evidence to accuse him of lying about this discovery. They have used this accusation to malign him and cast doubt upon his other work. All of Ron’s discoveries are adequately documented for anyone who is honest-hearted and doesn’t place science above the Bible.

The latest accusation is that Ron has never excavated anything in Jerusalem and if he did, he did so illegally because he has never had a permit from the Israeli Antiquities Department.

In order to work in this politically and religiously sensitive area, Ron had to promise not to make public certain aspects of his work. He was not to reveal the nature of his work publicly or to publicly display his permit to excavate in that area.

The reasons for this were:

1. The location of the excavation site was in East Jerusalem, part of the “occupied territories” from the 1967 war, and a series of United Nations resolutions denounced and prohibited “archaeological excavations” in these areas.

2. After the head Israeli official was convinced (by viewing some of the artifacts associated with the dig) that the Ark of the Covenant had been found, it was feared that certain religious groups would seize upon a “confirmed” discovery as a sign from God to retake the temple mount, destroy the Dome of the Rock and build a third temple. There has been a general threat of this in Israel for many years and if this were to occur it would definitely ignite an all out war with the entire Arab world.

The main points we want to establish in this update are:

1. That Ron Wyatt did perform extensive excavation work in the area of the Calvary escarpment and the Garden Tomb.

2. That these excavations were done with the knowledge and permission of the Israeli Antiquities Authority (IAA).

To support their accusation Ron’s critics cite a series of letters from the IAA as proof of their accusations. These letters basically state that the IAA knows of no archaeological excavations or discoveries in that area by Ron Wyatt and that if he has dug in Jerusalem he did so illegally.

It is important to understand that the IAA is not going to make a public declaration that they have issued permits for any archaeological excavations in this area. They also are not going to admit that they know of the discovery of the Ark. In fact only 3 or 4 people in the IAA even know of the discovery of the Ark. However, it can be proven beyond a reasonable doubt that Ron Wyatt did perform these excavations and that he did have the proper permits.

The first item we want to show is a letter from the Garden Tomb Association. Anyone can get a copy of this letter simply by going to the Garden Tomb and asking them about Ron Wyatt’s work there.

Quoting from this letter (not dated) printed on their own letterhead, we read the following:

The Council of the Garden Tomb Association (London) totally refute the claim of Mr. Wyatt to have discovered the original Ark of the Covenant or any other biblical artefacts within the boundaries of the area known as the Garden Tomb Jerusalem. Though Mr. Wyatt was allowed to dig within this privately owned garden on a number of occasions (the last occasion being the summer of 1991) staff members of the Association observed his progress and entered his excavated shaft. As far as we are aware nothing was ever discovered to support his claims nor have we seen any evidence of biblical artefacts or temple treasures.

The Israeli Antiquities Authority recently stated that Mr. Wyatt lacks any archaeological qualification and has never received a license to excavate in Jerusalem. Quote “We are aware of his (Mr. Wyatt’s) claims which border on the absurd as they have no scientific basis whatsoever nor have they been published in a professional journal.”

A scanned copy of this letter can be seen below. 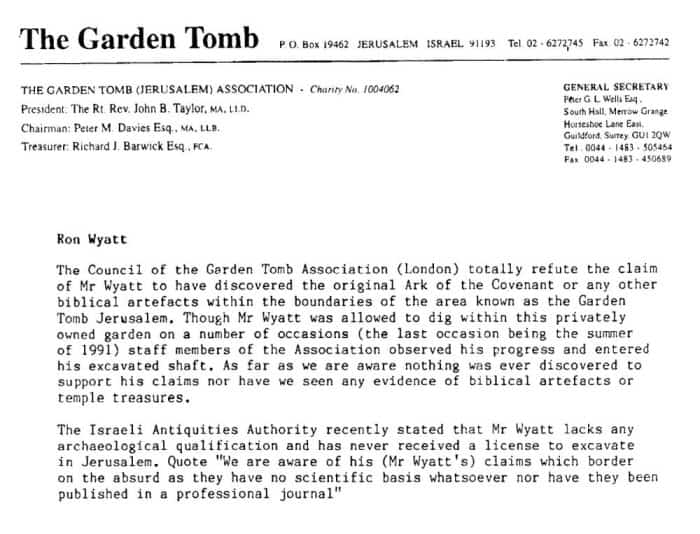 While the tone of this letter is generally negative it does clearly establish one point……… that Ron Wyatt did perform excavations on their property until 1991.

The next item is a letter dated July 20, 1986 from Dr. William Shea of the “Biblical Research Institute”. He is an archaeologist who is well thought of in many circles. This letter is written to Ron from Dr. Shea about a meeting he had with Dan Bahat who at that time was in charge of the Jerusalem District of the Israeli Department of Antiquities. Dr. Shea was involved for a time with Ron’s work in Turkey and Israel and was on the scene when some of the excavations took place at the Garden Tomb. Here are some excerpts from that letter.

“3. The main point that he (Bahat) covered was what you wanted to know from his letter………….. The points he covered were these:

a. In the first place the supervisorship of the Garden Tomb property has changed and for further work in the area you would need permission of the new proprietors. The old man (Rev. White?) has retired and you will have to work with the new people there now.

b. Bahat himself does not want you to do any more tunneling as he says this is not sound archaeological technique and if you found something it would not be demonstrated so in proper relations because of a lack of stratigraphic digging. So the way the site has to be approached according to his instructions is to dig a series of 5 meter squares up to the face of the cliff and inwards, that way you will have stratigraphic control over your findings…………..

4. He did report on the pottery that you brought to him and he says that it is “Second temple period to Medieval” and he said this was a surprise to him because he expected only the later period to be represented…………..”

The entire letter can be viewed below. 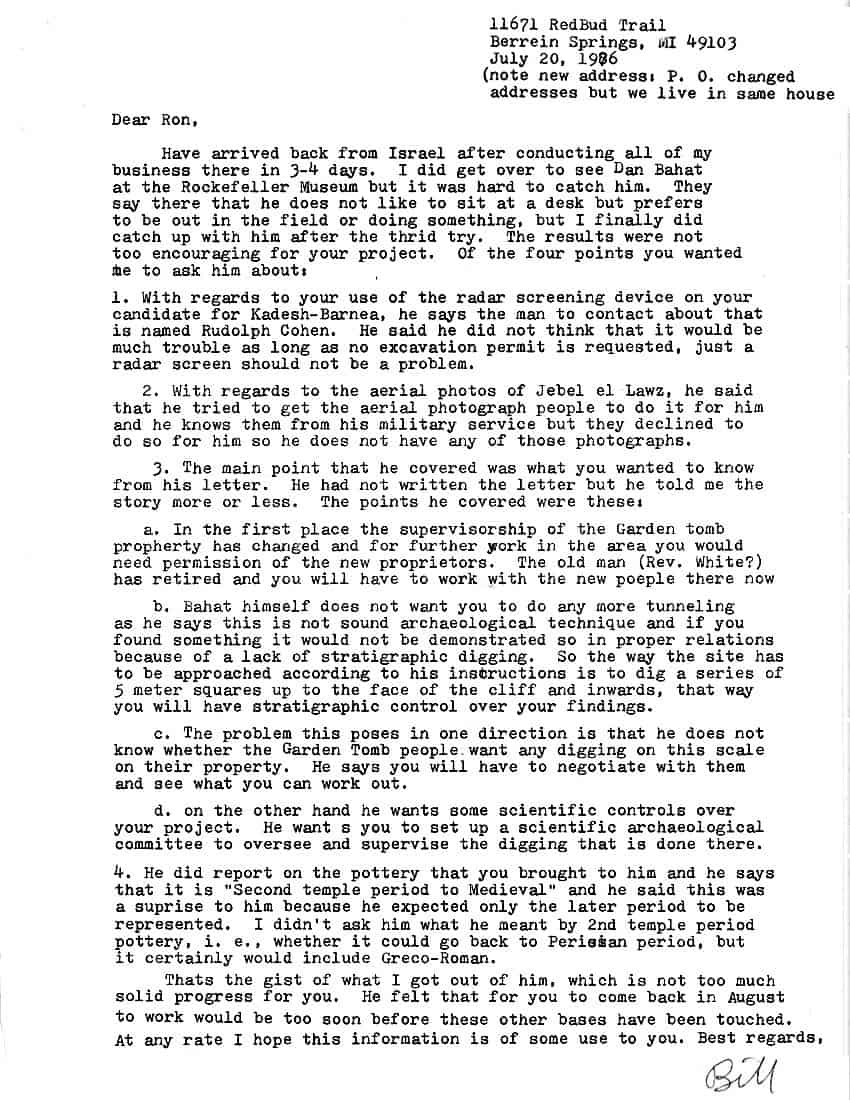 Notice that not only does this letter reveal that the head of the IAA knew about his excavation work at the Garden Tomb but Mr. Bahat even critiqued Ron’s work and suggested alternate methods of excavation. It is also revealed that some of the artifacts that Ron brought out of the excavation were from the second temple period. This would be consistent with this particular excavation.

The next item is a letter written by Dr. Shea to an individual who inquired as to whether Ron Wyatt had a permit from the IAA to excavate in Jerusalem. The letter is dated February 19, 1999.

“Dear John,
A scanned copy of the letter can be seen below.

Thanks very much for your inquiry about Ron Wyatt’s permit to work in the Garden Tomb area. Yes, he did have a permit from the department of antiquities to work there for several years. He also had permission from the Garden Tomb authority. I contacted Rudolph Cohen who at the time (1986) was supervisor for the Dept. of Antiquities to get Ron’s permit extended. Cohen said that he had to set up a supervisory board of three qualified archaeologists. I don’t think that Ron ever did this so his permit lapsed. The same can be said for the Garden Tomb people. In other words, although he did have permits at one time, I don’t believe that they are any longer current. 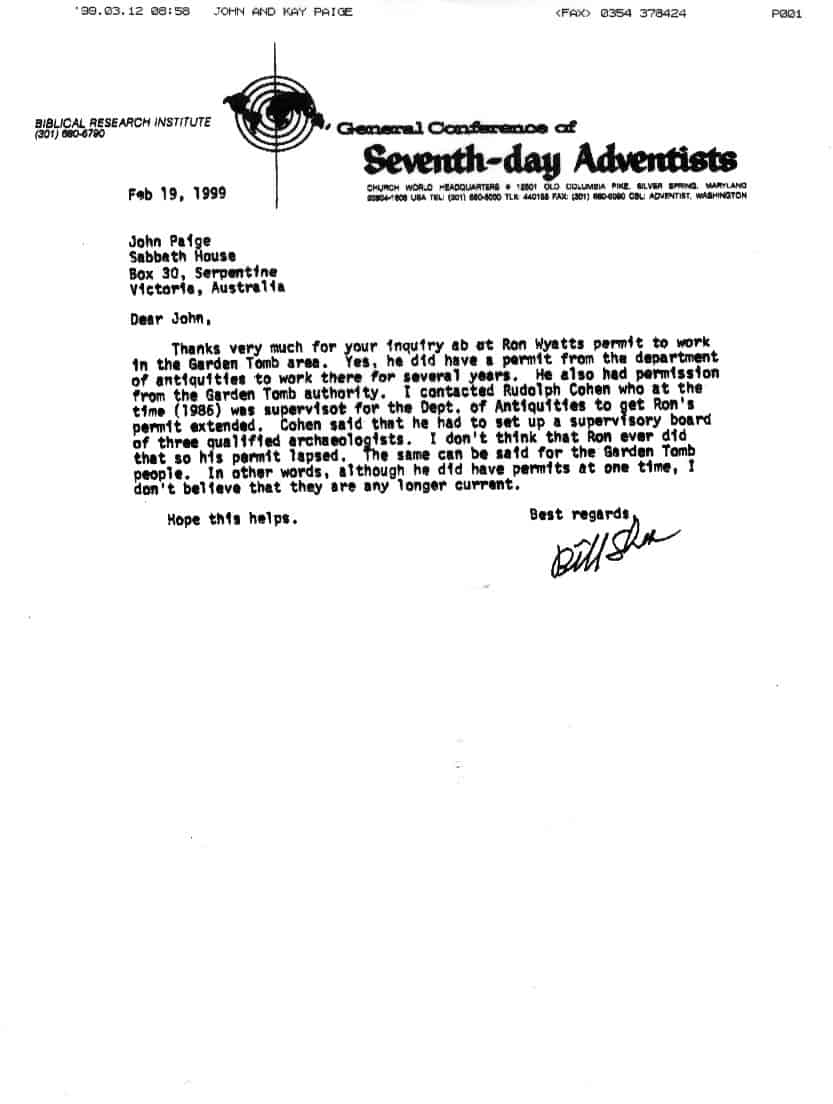 These three letters clearly show that Ron Wyatt did excavate in the Calvary escarpment area and that he did so with the appropriate permission.

It should be pointed out that Ron Wyatt is not the only person that has done archaeological excavation in “occupied territories” under similar restrictions. In fact everyone that has dug in these areas has done so under a strict agreement not to reveal the nature of their work publicly or to publicly display their permits.

Several years ago a very well known archaeologist broke this promise by holding a press conference and announcing that he had found some artifacts that were associated with the second temple. When this occurred the IAA revoked his permit and kicked him off the site.

The same thing could and would happen to Ron Wyatt if he were to publicly display his permits. While the Ark of the Covenant dig is finished, there is still the need of access.

Hopefully very soon, but at the time appointed by God, the Ark of the Covenant will be revealed to the world and the tables of stone with God’s law written on them by His own finger, will be put on display. Then the world will know that there is still a God in Israel.

Did Ron Wyatt Actually Excavate at the Calvary Escarpment?
December 1998 Dive Trip by Bill Fry In Memory of Ron Wyatt