IN SEARCH OF NOAH’S ARK: Part 3 — What if the stories are true?

CHUCK: Once I’m safely ensconced in my room, Tom calls and says he is on the way up with the satellite phone. I was three floors up; Tom was two. I set up the computer and software. Tom comes in and hands me several different AC converters. We found a match on the first try! OK, everything’s ready. Power on. Fzzzzzzzsssstttttt! POP! The power supply to the laptop just got fried! We look at the power supply and then at each other. Tom says, “I hope they take American Express!”

We both dive for the satellite phone, which Tom told me he had charged up two days before. We discover that the phone’s power supply fits the computer perfectly. We power up the computer and use what precious time we have on the battery to set up the SAT phone software and make certain it is functional. Then we try to get on the Internet, but it doesn’t seem to work. We try again. Still nothing. We try every option we can think of … nothing! 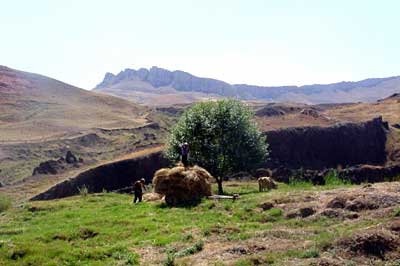 A Turkish farmer collects hay from a field at Durupinar — right next to the formation some believe is the remains of Noah’s Ark. Photo by Chuck Hughes

Hmmmm … think. Where to go from here? Communication with home appears to be a tad marginal, and with all this equipment available, resorting to a long distance call is premature, not to mention embarrassing. Let’s call the Baptist! He’s local. Perhaps he knows how we can connect to the Internet! We call, but he’s not there. So we leave a message with his partner, and Tom says, “Sounds like quitting time to me!” He walks to the door, turns and says, “9 a.m. for breakfast,” and “Goodnight.”

After he leaves, I go downstairs, just to look around.

TOM: As I leave Chuck’s room, I start thinking again about the Ark. Are the stories true? I have received a lot of information from other Ark researchers. I had spoken with yet another filmmaker by phone. They tell stories about bad dreams, signs from Satan, visions of death, failure of tested gear — on and on. Authors of books about Noah’s Ark and Mt. Ararat sent to their knees by fear. Fear of what? I’m curious, but not scared … at least not yet.

I guess I’m just now starting to understand God has a plan, and it’s beginning to unfold. Now is the time to use the wisdom I asked God to give to me. I stop right there in the hall and ask the Lord to help us. I don’t want to fall victim to any trap Satan sets for us. I don’t want to take anything for granted — even a bad thing. Since it seems we have stumbled into a roadblock with the laptop and the satellite phone, I pray for direction. How can I communicate with home when every moment I am trying to avoid an expense?

I am amazed at the feeling that has overtaken me. I think about three women in another part of the world, right now — this very minute — who are praying for us: my mother, my wife and her mother, all praying for God to watch over us and meet our needs. What a special gift to have in mind! The feeling that now claims me is as if an angel is putting a hand on my shoulder, letting me know that the promises made to me in Isaiah 54:14-17, Isaiah 42:5-7 and Isaiah 41:9-13 are just that — promises.

We’re here in Turkey, because God brought us here. I finish my prayer, open the door to my room and go to bed.

CHUCK: As I get to the bottom of the stairs in the lobby, I look up and see someone I saw earlier in the day. The sandy haired man in the brown suit and striped shirt is sitting in the lobby, apparently reading a newspaper. This is the same guy I saw on the cell phone at the Ankara airport. Everyone else in the room is watching the Olympics on the lobby TV, but he is reading a newspaper. I’m curious, and a little unnerved. We were warned that the secret police would be watching. With everything else we have to contend with, maybe a personal bodyguard isn’t a bad idea, if that’s who this stranger is.

The next morning, Tom and I meet for a breakfast of bread, olives and tomatoes. We walk out of the hotel and see rows of markets and shops lining either side of the street. The temperature is probably similar to a summer in Aspen, Colo., 80s and no humidity. There is a large hotel on the opposite corner that reminds me of a ’40s movie, with a striped canopy and uniformed doorman. Pretty elegant! This is a prime location in the heart of Ankara. What a great place to start our adventure!

Since we have time before we head back to the airport, Tom and I go to his room, where he gives me the “101” on the audio gear and microphones. I don’t have his background in television, so he gives me a hands-on demonstration of what I’ll need to do once we’re in the field. It’s a good thing I can write a little!

We review our plans for Erzurum and beyond, checking maps and research information on our final destination, the town of Dogubayazit, population just over 30,000. It’s the last town before the Iranian border and a staging area for oil tanker trucks crossing the border. It’s also our starting point at the base of Mt. Ararat.

I think we’ve done pretty good in the “big city,” but we still haven’t contacted our families back home because of the computer problems. The Baptist will meet us in Erzurum. He’ll serve as our interpreter, but he also will bring some valuable, interesting information to the table. He’s made this trip before and knows the lay of the land. As a Turk, he will have a way to open doors that our predecessors found frustrating.

NEXT: Accosted by a “bandit.”