We just returned 2 weeks ago from a month long trip to eastern Turkey. There is both good and bad to report but most of it is good. In the past I have always been able to say that our trips have been a success. Every time I have traveled to the Mideast for exploration I have always come back with something positive to report. I give God the credit for that. Some of you who have traveled with me on these trips know what I am talking about.

However, on this trip, things were different from the start. The main obstacle was the weather. About a week before I left one of my Turkish contacts emailed and suggested that I delay my trip for 2-3 weeks because of heavy rains in the region. Of course I was already committed to my schedule so I went anyway.

The first 2 weeks were exactly as predicted by my contact. We only had 3 days without rain during that period. After the 5th day I insisted that we go to work anyway, rain or shine. Since it was quite cool as well as damp I immediately came down with a head cold. But we did accomplish one thing during that first 2 weeks.

On one of the nice days we had traveled to the ark site and was visiting with Hasan Ozer at the visitors center. When we came out to go down to the site I noticed that the building was overdue for some paint and a bit of roof repair. I also noticed that there was a perfect place for a “Visitors Center” sign just above the entrance. When I asked about this Hasan said that the government had never made a sign for the building. At that point I decided that Anchor Stone was going to have one made. Here is the result.

About 3 days later, when I was again at the visitors center, the Director of the Ministry of Culture from the provincial office and some of his staff came to the site to look things over. These are the same people that we gave a written report to about the inscription stone last year. They have now decided to place a fence around the entire ark site to protect it from the local people and treasure hunters. They were also very happy about the new sign.

They will also begin to charge a small fee for people to be escorted down onto the ark. At first this may seem like a restriction but the caretaker Hasan has always restricted people from going onto the ark unless he knew the people or they were being escorted by someone he knew. Now anyone who is willing to pay the Turkish equivalent of about $2 USD can get an escort down to the site.

The best part of all of this is that the government is finally starting to take the site seriously. One of my contacts told me that years ago when the site was set aside as a national park, the government stopped taking the site seriously because of all the political problems in the region. Now, with some of the latest findings, they now see the need to develop this site. More on this later.

Well, that was all that was accomplished during the first 2 weeks. The last 2 weeks saw a little bit of improvement in the weather but not much. It was still cool and seemed to rain every other day. We forged ahead with our 2 planned projects.

The first was to extract the “inscription stone” and carry it to the visitors center so it could be protected and studied in detail. When we first went down to look at the stone we saw that apparently the heavy rains has dislodged it and it had fallen into a small ravine about 15 feet from the ark. Well, that was half the work and was the part that we needed written permission for. Of course that never came.

But we had a bigger problem. Given the way the weather had been in the area for the last 6 weeks, there was no way we were going to be able to get this stone, which probably weighs about 600-700 pounds, up the hill. It was all we could do to get up the hill ourselves. It soon became apparent that we were not going to be able to accomplish this task.

At that point we shifted to our second project, finding the missing anchor stones. You see, during the time Ron Wyatt worked in this area, access was limited by the civil war going on between the radical Kurdish people and the Turkish government. And some of the artifacts had already been stolen or destroyed.

For that reason Ron kept the location of most of these stones a secret. Ron believed that there might be as many as 21 anchor stones in the area but he had only found 13. When he took a group or companion with him to the site he would only show them a couple of the stones.

However, a number of years ago, Ron drew up a map of the area showing where all the anchor stones that he found were located. He only left off one that was found after he had drawn up the map. It just so happens that I have a copy of that map.

Up until now I have only been able to find 6 of the anchor stones. With the help of this map we were able to find the location of another 6 anchor stones. We have a couple of poor pictures of the 13th stone, but we were not able to locate it. It is the one that is still partially buried.

In talking with some of the village elders I was told by 3 different people that there were 3 other stones at one time. Two of them were dragged down to the village years ago and later destroyed. The third was carried away at night by someone from another local village. That means we now know of 16 stones in total with 3 that will never be recovered. These new finds were very exciting to me and I started to feel like we were making some progress.

At the present time I will be showing some pictures of some of the stones but we will not be giving their location. There is still vandalism of these artifacts going on. Which brings us to the next part of the story. 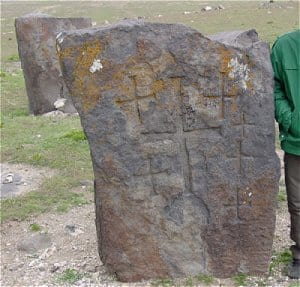 We went to his office and explained about our inability to move the inscription stone, how the Ministry of Culture was going to be fencing in the ark site and the continuing problems with the artifacts in and around Kazan. We asked for his help in getting these problems solved.

He was familiar with the ark site but not aware of the government’s new plans. He also was not aware of the anchor stones or their continued destruction. When he heard this he seemed to take it very personally since this was in his jurisdiction. He made us two promises.

I was thrilled by this mans willingness to help. You may be thinking the same thing that I was thinking. The promises of a politician aren’t often worth very much.

If this man was not a personal friend of my guide and his father I would agree but I was told that once he had made this promise in front of a friend, he was morally obligated to fulfill it. Time will tell whether any of this actually happens but my Turkish contacts, who are usually not impressed with these type of promises, are very positive about these. We will continue to monitor the situation.

So you can see the Lord again blessed our trip, He just didn’t answer my prayers in the way I expected. I am pleased with the results and I am looking forward to finally having at least some of these precious and irreplaceable artifacts protected.