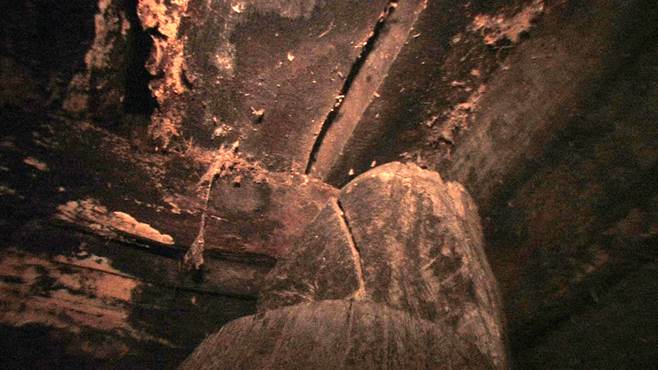 Recently I came across this photo from the Chinese expeditions on Mount Ararat.  They are hoping to use this wood evidence to substantiate the tradition that the ship landed on the mountain.  There are numerous reasons why this could not be possible, even though we clearly see the wood.  Let’s assume that this picture is indeed from somewhere high on the mountain, it was reported to be above the 14,000’ level(snow line). I will summarize several issues as well as the photographic evidence: 1) Flow dynamics suggest that an object floating over a mountain peak, with the water reseeding, will be drawn away from the peak as opposed to landing on it.

2) A good question to ask is whether the mountain was even there during the landing of the Ark (4,350 years ago).  Ararat is a strata-volcano, meaning it developed in mass from volcanic eruptions, each eruption builds on the previous adding layers or strata.  Was volcanic activity even possible before the great flood?  The book of Genesis portrays the earth as a perfectly balanced eco-system, with no mention of fractured strata, earthquakes, volcanoes, or even rain storms.  (Gen. 1:31, 2:5-6) This would suggest that our fractured, waterlogged, lava spouting world is all post-flood phenomena.  The lava flow and fields of Ararat suggest a relatively young volcano with development within the last 2,500 years, this would follow the Biblical model.  This is just one aspect that would disqualify the volcano as a landing site.

3) Genesis suggests no seasonal changes in the pre-flood environment, no wet/dry periods which is recorded in trees as those growth rings we notice (dendochronology).  The photo above shows rings in the end of the log, which means it was of post-flood origin disqualifying it as a piece of the Ark.  In past centuries due to the tradition as the landing site, shrines, houses, even temple structures were built on the mountain, so it would not be surprising to find remnants of post-flood wood there.  Plus to keep the arkhunting industry alive (and it IS an industry!) there are many documented instances of greedy guides planting wood specimens on the volcano as “evidence”.

4) Even if the volcano was formed during the flood’s aftermath, the flood waters would have had to be more than 17,000 feet deep.  Even with all the water known to be on or in the earth, such a flood event does not seem possible.

With these compelling aspects of the volcano and wood evidence, plus the Bible itself specifying a region (region or kingdom of Urartu) not any specific peak, Mt Ararat is the most unlikely of landing sites, even impossible.

Ron Wyatt and the Ark of the Covenant, 1997 Anchor Stone in Beckley, West Virginia

The Stones Crying Out

The Church of the Holy Sepulchre vs The Garden Tomb

Could this be the biggest find since the Dead Sea Scrolls?