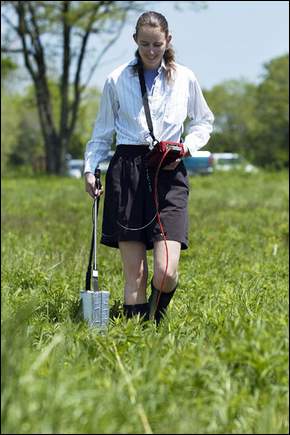 Ever wondered what ancient treasures may be buried under your feet?  A group of archeologists from across America and beyond have converged on Chillicothe to learn more about how to find what’s underground. Participants from 27 states and three countries are participating in the five-day event, which is being hosted by Hopewell Culture National Historical Park.

The event is focused on techniques and tools which allow the user to "see" below the surface of the ground without digging.

Bruce Bevan, of Virginia, was one of the 10 to 15 instructors at the site. A geophysicist, he is a contractor who is often hired to search for unmarked graves in cemeteries.  He said the group was "trying to find out how to learn more about these ancient earthworks without excavating them."

The techniques are not limited to archaeological use.

Steven DeVore, an archaeologist with the National Parks Service, said the techniques can be used for mineral exploration and finding pollution. Law enforcement officials also use the techniques to locate clandestine graves or buried evidence.

Participants included university faculty and students, private consultants, Native American tribes and government archaeologists, such as the Army laboratory in charge of locating the remains of servicemen listed as "Missing in Action."

Among the students present to learn about the tools and techniques was Arlo McKee, a student at the University of Nebraska-Lincoln and a student employee of the Midwest Archaeological Center.  He said he was involved in Tuesday’s activities to make sure everybody was able to get experience using the field equipment.

Nomi Greber, the curator of archaeology at the Cleveland Museum of Natural History, was also present at Tuesday’s field session. Greber has been on numerous digs in Ross County.

"I’m a part-time resident of Chillicothe," she joked.

The event was organized by the National Park’s Service Midwest Archeological Center in Lincoln, Neb.

(Giammarise can be reached at 772-9367 or via e-mail at kgiammar@nncogannett.com)

Tut Was Not Such a Handsome Golden Youth, After All Creationists see eruption through biblical eyes