LONDON, September 14 (IranMania) – Burned City located 55 kms to the south of Zabol in Sistan Baluchestan province was the capital of the region for more than 1000 years (3200-2100 BC). 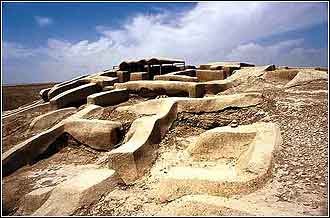 During the period, the city was known not only for wide trade exchanges with other lands in the northeast and west of the region, but probably had established close political and social relations with them, according to IRNA.

With its 150-hectare area of land, Burned City is one of the largest and richest archaeological sites in eastern Iran. The 1997-1998 excavation was launched at the necropolis and was extended to the monumental area in 1999. Hundreds of objects made from various materials were unearthed during the survey, which are now being studied by specialists from Iran’s Cultural Heritage and Tourism Organization (ICHTO).

Most of the excavated graves dating back to the second and third periods (ca. 2700-2300 BC) of anthropological research on the human graveyard show that the oldest individual was a woman who died at the age of 60.

The remains of a large building revealing 17 rooms and two staircases have been discovered in the area.

Hundreds of anthropomorphic and zoomorphic clay figurine seals, seal impressions, cloth, ropes, wooden and stone objects and pottery vessels were found inside various rooms of the structure. One of the staircases comprises eight steps of 320-cm mud bricks.

Although the structure was clearly a public building, its original function is not clear yet.

The Iranian archaeological expedition intends to continue its excavations in the necropolis and in the monumental area, begin new researches on the industrial area, probable towers and defensive wall of the city.

The town of Zabol (Sistan) with a 400,000 population is situated 205 kms to the northeast of the provincial capital of Zahedan.

In ancient time, Sistan, in particular the Burned City, was considered as a center of communication among the major civilizations of Transoxiania (modern-day Uzbekistan), Mesopotamia, India and China, mainly on account of its special climatic, political and cultural position.

Researches from foreign countries including Italy and Georgia including zoologists and archaeo-botanists work jointly with Iranian archaeologists.

Head of Zabol Archaeological Expedition, Seyed Mansour Seyed Sajjadi told IRNA that survey on the residential areas and graveyard of the Burned City shows that the city was inhabited during four periods from 1800 to 3200 BC.

Concerning the reason for naming the city `the burned city’ was its burning in two stages in 2700 and 2400 BC.

Prior to launching survey at the site, researchers and archaeologists believed that centers of culture and civilization only existed in Mesopotamia in southwestern Iran.

In recent years, it was revealed that Burned City was not merely an ordinary ancient site of the bronze age. It has rather been proved as the largest social, political and economic hub during the third and second millennia BC.

Turning to the unique classification of the historical city into residential areas, memorial buildings and industrial workshops, he said that no ancient city in the world rivals the Burned City in this respect.

“About 40,000 graves containing four bln artifacts have already been discovered at the 25-hectare graveyard of the city.

“Meanwhile, after close examination of the unearthed multi-colored fabric, it has been proved that the Burned City possessed the greatest collection of the world’s fabric and organic materials,” added Sajjadi.

He noted that various objects including working tools, foodstuff and cosmetics found in the graveyards of the city prove that the residents of the city believed in the postmortem life.

“Cylindrical and flat beads was the sign that the residents of the city enjoyed a strong economy. However, more than 90 % of the beads have been discovered at women’s graves, which shows that women handled the economic affairs.

“In ancient time, beads were considered as a tool to control the economic situation of the communities. The holes of some of the unearthed beads are so tight that only a string of human hair can pass through them,” added the official.

He noted that no tablet or archive has ever been discovered during the past eight excavation seasons. “But two samples of scripts have already been found.”

“Caraway seed, coriander, backgammon, the recipes of five dishes and particularly animation were among the discoveries of the past seasons.

“The discovery of backgammon in the Burned City proves that science and industry originated from here and spread to other areas,” he added.