IN SEARCH OF NOAH’S ARK: Part 6 — The Ishak Pasha castle

CHUCK: We have a quick breakfast at the hotel, during which we talk to two American climbers who arrived after we retired last evening. They are a father-son team who also are members of the Discovery Club, an international mountain climbing association. They are heading out to Ararat after breakfast, so we will try to interview them when they come off the mountain. As experienced climbers, they plan to summit the mountain and be back in two days. Most climbers on the Victory Climb that we’re covering will take a minimum of four days to do the same thing. 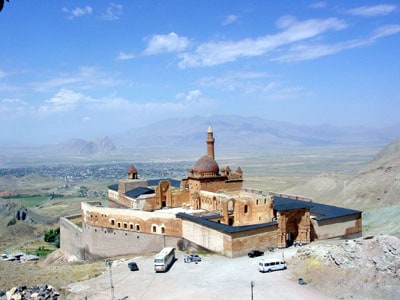 After breakfast, we load the camera equipment into the car and head for Ishak Pasha, a 17th-century castle not far from Dogubayazit. Not only is the architecture magnificent, but across the road, literally, is another stronghold dating far back into ancient history.

You can imagine Ishak Pasha at its height. You enter a wide courtyard, with areas for storage and horses along the left walls. The interior marble floor is in good condition. The carvings on the walls are as clear today as they were then. The spacious entrance hall and reception room also are elegant, with high ceilings and broad windows to let in the daylight. There is a tall minaret on the interior mosque, and the paint on the domed ceiling is still as blue as the night sky.

One of the magnificent features of the castle is the water system that ran throughout the palace. In the courtyard, there is a water fountain built into the wall that, if you wanted, also could pump milk! This was extraordinary for the times!

According to legend, the owner of the palace was a brigand of some repute who robbed caravans along the Silk Road. He deliberately built his castle out of sight of Ararat. Evidently, the gentleman had serious problems with the shadow of the “holy mountain.”

From here, we drive a half-mile to a site where Turkish archeologists are excavating a large graveyard. Their method of excavation, however, is a little more extreme than I expected. They took a bulldozer and made three runs about 50 feet apart along the mountain slope, unearthing whatever was there.

We are able to get near enough to touch the bones in the tightly packed graves. One is the final resting place of a child or very small woman. The rib cage and pelvis are intact, waiting for the archeologists to clean, photograph and number. Along this excavated wall are numerous gravesites with exposed bone and skeletal remains. Everyone present is very respectful of the site, which local Muslims consider holy. Children and families are walking back and forth to a spring that flows into a manmade cistern.

At the top of a small hill near Ishak Pasha is a little cafÃ© whose owner is very friendly. He tells us how to go back to Dobi by way of Durupinar, the site which the Turkish government says is the actual location of the remains of Noah’s Ark.

Although only a dirt road in some areas, the view is the most scenic and beautiful we have driven. We drive through small shepherd communities, with Ararat to our left. These towns give you a glimpse back in time. Black tents are pitched at the watering spots. Sheep and goats are herded by young and old alike.

My father always told me to beware of shortcuts, and this one is no exception.

One spot in particular is a bit on the harrowing side. The road runs across a stream with a drop-off of about 20 feet on either side. On crossing the stream, there is a sharp uphill slope that has been furrowed and rutted by traffic and rain. We can tell it’s going to be quite a challenge to get up the 30-foot incline. Tom and I get out of the car and do a little “sidewalk supervising,” while the Baptist tackles the hill.

The Baptist takes four or five runs at the hill. But on each attempt, the little car can only get as far as a large piece of basalt rock that has been worn as smooth as glass. Each time the Baptist gets to the rock, the car slides sideways like it has hit ice. We try using the car’s floor mats as traction plates over the rock, but the tires spin and the mats fly. We’re wincing at the thought of having to walk back to the cafÃ© to get a tow truck. Finally, I ask the Baptist to make one more all-ahead-full attack on the hill.

Taking a deep breath and saying a little prayer, the Baptist backs the timid little vehicle down the slope, guns the engine, pops the clutch and flies with abandon toward the hill. With the smell of burning rubber, the car comes roaring up the hill, shoots past the rock, skids sideways and perches atop the rise. The Battle of the Gully that Almost Ate the Car is over!

We look over our shoulders at Ararat and smile. This was just a bump compared to the mountain’s majesty.

NEXT: Hassan Baba, ‘keeper of the Ark’