IN SEARCH OF NOAH’S ARK: Part 5 — At the foot of Ararat

CHUCK: We arrive in Dobi around 4 p.m., after a four-hour drive. We are here to meet members of the Turkish Mountaineering Federation, who are preparing for the “Victory Climb,” held each year on the day Turks celebrate the founding of their country as an independent state. Ark researchers join the Victory Climb in hopes of finding evidence of the Ark on the mountain, because the expedition is held during warmer months when Ararat’s glaciers have melted back the most. 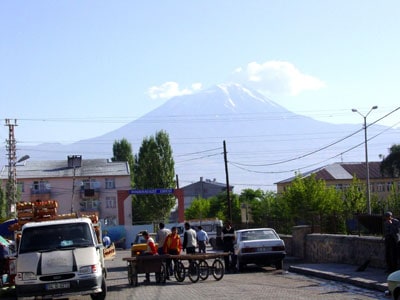 The Baptist suggests we stay at the same hotel as the climbers, so we pull into the Hotel Isfahan. Tom and the Baptist check for a room, get a good rate and we unload our gear into the lobby, a large sitting room that resembles a New York men’s club. The large room is paneled in mahogany, and there are small groupings of overstuffed leather chairs and sofas throughout the area. Coffee tables hold ashtrays and magazines. Backgammon boards and dominoes are available at the front desk. Pretty nice for a climb hotel.

The elevator is broken — and has been since last month’s earthquake. We grab armloads of gear and hike up the stairs to our room. Good thing we’re only on the second floor!

I hadn’t expected much by way of a room, since this is a climber’s hotel, but we’ve all seen worse. The room is a 12-foot by 10-foot rectangle, with three beds packed tightly into it. There is a short entryway with a little alcove to the right. The bathroom is to the left. We stack our equipment in the alcove — and anywhere else we can find space — and check things out.

The bathroom is a little curious. It’s an eight-foot by five-foot room, with ceramic tile almost to the ceiling. The floor has a drain in the middle, and it doesn’t take too long to figure out why. If you back up to the rear wall, you see the sink on your left and the toilet on your right. Between the two, two feet off the floor, is a hand-held showerhead — hence the need for tiled floor and walls. I find it’s a good idea to put the toilet paper up high.

After checking out the room and securing the gear, we set out to find the group leader we need to contact for our interviews. Unfortunately, the climb group got delayed in Erzurum and will be late, getting in probably around 10 or 11.

We take a walk and find an Internet cafÃ© where we can check our e-mail and communicate with contacts. We are feeling good and walking tall. God is with us and looking over His sheep!

We met Ismet Ozturk by accident. He is in Dobi because he is taking one of the German climbing teams up the mountain. Ismet has been involved in mountain climbing and Ararat research for many years. He also is involved with the Turkish Mountaineering Federation and has his own walking, hiking and trekking company in his home city of Urgup.

Ismet recommends a good Turkish pizza place, and we talk for several hours about his involvement in the mountaineering federation and his company. He is friendly and talkative and tells stories about his experiences and the “holy mountain.” He tells us about an elderly Japanese professor and his wife who climbed Ararat to the 14,000-foot level. Ismet said the couple was determined to summit the mountain. The professor even said he would be happy to die on the mountain, if that was his destiny. After several hours, they all made it. The professor reached into his pocket and removed a small Turkish flag, to honor the people whose mountain he had just climbed, and then planted a small Japanese flag next to it.

Ismet tells us he has climbed the mountain more than 200 times, both guiding others and alone, in summer and winter. His love of the mountains of Turkey shines through his broken English, and the more passionate he becomes about mountain climbing, the more he switches to Turkish. Tom sets up an interview with him the following day at the hotel. The hotel manager has given us permission to use the fifth-floor balcony, where we will have Mount Ararat as our backdrop.

Things definitely are looking up! We are on schedule and in line to get some interesting interviews. We are anxious to get some real footage of Ararat and the surrounding area.

We head back to our hotel room to settle in for the evening. I have some writing to do, and Tom and the Baptist have some planning of their own. Since they are the camera people, I have to be satisfied with only a peripheral understanding of what they are talking about.

I open my Bible, and we share it, each of us reading chapters and verses we feel are appropriate to our circumstances.

Now the excitement is growing exponentially! Tomorrow we begin work in earnest.

NEXT: The castle at Ishak Pasha