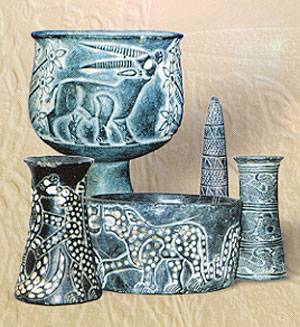 Studies by five linguists from the United States, France, Russia, Denmark, and Iran on a discovered inscription in Jiroft indicate that this Elamit script is 300 years older than that of the great civilization of Susa. Archeologists believe that Jiroft was the origin of Elamit written language in which the writing system developed first and was then spread across the country and reached Susa. The discovered inscription of Jiroft is the most ancient written script found so far.

The city of Jiroft is situated close to Halil Rud historical site. Halil Rud, located on the basin of Halil Rood River enjoyed a rich civilization. Many stone and clay objects as well as other historical evidence belonging to the third millennium BC have been discovered during the archeological excavations and also the illegal diggings by the smugglers in this area. 120 historical sites, including that of Jiroft, have been identified in the basin of the 400 kilometer length of Halil Rud River.

According to archeological studies, the history of Halil Rud area goes back to some 3000 years ago. The discovered stone dishes in the area belonging to the first half of the third millennium BC point to the developed art of carving on stones at that time.

“Five Elamit professional linguists from different countries have studied the brick inscription discovered in Jiroft. According to the studies, they have concluded that this discovered inscription is 300 years older than that found in Susa; and most probably the written language went to Susa from this region. However, more studies are still needed to give a final approval to this thesis,” said Yousof Majid Zadeh, head of archeological excavation team in Jiroft.

The inscription was carved on a brick, and only the lower left corner of it has been remained. Although only two lines with a few words are remained intact on this inscription, there is no doubt that it is an Elamit written script.

The most famous Elamit script is the Susinak inscription which was unearthed during archeological excavations in Susa. This inscription is most probably left from the reign of Susinak, Elamite king who ruled during the second half of the first millennium BC.

Elamit language is only partly understood by scholars. It had no relationship to Sumerian, Semitic or Indo-European languages, and there are no modern descendants of it. After 3000 BC the Elamits developed a semi-pictographic writing system called Proto-Elamit. Later the cuneiform script was introduced.

Archeological excavations are being carried out in north and south shores of the Halil Rud River in order to discover different dwellings and cemeteries in the region.

The wide plundering of the historical and archeological relics by the smugglers led to the lost of a lot of these invaluable evidences. Most of these historical relics were taken out of the country. Although Iran is trying to redeem them, some of those who have collected these relics refuse to give them back claiming that these articles were not made in Iran and thus don’t belong to this country. Iranian archeologists are trying to discover more evidence to prove Iran?s possession over these historical objects.