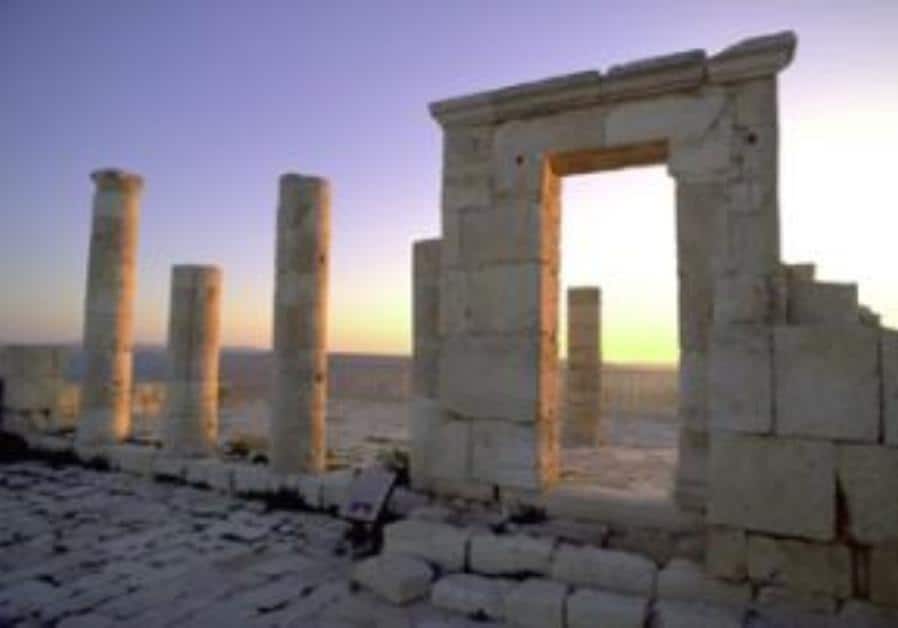 Discovery of an ancient village just outside Jerusalem has brought into question one of the strongest images of biblical times – the wholesale flight of Jews running for their lives after the Roman destruction of the Jewish Temple in Jerusalem in 70 CE.

Just beneath the main road leading north from Jerusalem, archaeologists have found the walls of houses in a well-planned community that existed after the temple’s destruction. It might lead to rewriting the history books if it was really Jewish. But at least one expert isn’t sure it was.

The discovery of stone vessels indicate Jews in the village continued to live by religious purity laws after 70 CE, said Debbie Sklar-Parnes, of the Israel Antiquities Authority, who is overseeing the dig.

This is the first evidence that Jews lived so close to Jerusalem – about 1.5 kilometers (a mile) away – after the destruction of the Second Temple, Sklar-Parnes said.

Archaeologists used pottery and coins found at the site to estimate that people lived there from around 70 to 132 CE, when the Romans crushed a second Jewish revolt.

About 30 Palestinian workers for the Israel Antiquities Authority – some of them sent to dig here by the government instead of collecting unemployment – uncovered and brushed dust off 2,000-year-old glass jewelry, bronze coins and stone vases in the hole carved out in the middle of the road as cars whizzed by.

“We were surprised to find such a massive settlement,” Sklar-Parnes said. She estimated the village covered between three and four acres (1.2-1.6 hectares). She said it is impossible to tell if the settlement was built before or after the destruction of the temple, though life continued there after 70 CE.

But Hebrew University historian Lee Levine questioned whether the village was actually Jewish.

“The evidence is a little mixed,” Levine said. The presence of wine amphorae from Italy and the absence of ritual baths cast some doubt on the Jewishness of the village, he said.

During the years of the settlement, most historians believe observant Jews no longer used wine made by non-Jews, Levine said. And assuming the settlement existed before the destruction of the temple, it is unusual there were no ritual baths, which were tied directly to temple rituals, he said.

But he noted they might still be found. Only a fraction of the settlement has been excavated, Sklar-Parnes said.

It is a widely held belief that Jews fled north from the Jerusalem area in 70 A.D. because Romans persecuted them and confiscated their property, Levine said. There are tales of Jews being led away in chains and sacked treasures from the temple on display in Rome, where the Arch of Titus, built to celebrate the triumph, still stands.

But it is “perfectly reasonable” that Jews continued to live around Jerusalem after the temple’s destruction, said Daniel Schwartz, also a historian at Hebrew University. The Jews just would have had to pay higher taxes and do road work, farming or other labor for the Romans, he said. It is possible they operated two public bath houses for Roman soldiers that were found at the site, he said.

Sklar-Parnes, Schwartz and Levine said the settlement appeared to have been abandoned around 132, in the time of the second Jewish uprising against the Romans, called the Bar Kokhba Revolt. That time frame provided strong evidence it was a Jewish settlement, they said. It is likely that the villagers fled upon hearing of an impending Roman attack, Levine said.

“The Romans were pretty heavy-handed in putting down the second revolt,” Levine said. From the jewelry, small stone vessels and other items found in the site, it appears the inhabitants fled in a hurry, Sklar-Parnes said.

The stone vessels left behind provide the best evidence the settlement was Jewish, Sklar-Parnes said. Jews used stone vessels because they didn’t absorb liquids, allowing different materials to be stored while satisfying religious purity laws, she and Schwartz said.

It also appears that the settlement was not inhabited by anyone else after its original residents left, something rather unusual, Sklar-Parnes said.

The excavations began in 2003 ahead of the construction of a light rail line, because Israeli law requires archaeological exploration before any building project, said Itsho Gur, spokesman for the Moriah Co., which is building the train route.

According to historical records, the settlement was on the main Roman road between Jerusalem and Nazareth. Later, the Turks built a road in the same place and Jordan constructed a road on top of that early in the 20th century. Finally, Israel paved it after its capture of east Jerusalem in the 1967 war.

Look Out! He’s Got a Shotgun! Who died first, Noah or his wife?