Researcher develops methods to test artifacts’ links to the Bible

A Purdue University professor has invented a system to judge whether ancient inscriptions refer to people in the Bible.Â  Lawrence Mykytiuk (MICK-ee-took) uses the system to test whether archaeological inscriptions refer to ancient Hebrew kings such as David, Omri, Jeroboam II, Uzziah and other Old Testament personages such as Mesha and the high priest Hilkiah. The system and results are detailed in his new book, “Identifying Biblical Persons in Northwest Semitic Inscriptions of 1200-539 B.C.E.” (Society of Biblical Literature, $42.95).

Mykytiuk’s work steps outside the conflict between two camps of biblical scholars: the “maximalists” who hold the Bible to be historically correct, some as far back as the times of Abraham, circa 2000 B.C.; and the “minimalists” who claim the entire Old Testament is fiction with only tiny bits of genuine historical memory. 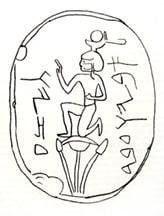 “Scholarship is supposed to be objective,” Mykytiuk, an associate professor of library science, said. “My book attempts to avoid the opposing assumptions of both sides. People are free to choose whatever view of Scripture they want, but my question is: ‘Where does an inscription support the Bible?'”

Minimalism became a force in biblical scholarship in the 1980s and gained momentum in 1992 with the publication of P. R. Davies’ book, “In Search of ‘Ancient Israel’,” but took a hit one year later when archaeologists unearthed a fragment at Tel Dan in northern Israel that appeared to mention “the house of David.”

To properly determine the significance of that inscription and others like it, Mykytiuk devised a comprehensive system to make identifications â€“ something that had never been done before. Eighty pages of his book are devoted to a system that could feasibly be adapted and applied by archaeologists and historians of other ancient cultures. Mykytiuk identifies key criteria for authenticity that address:

â€¢ Whether the data included in the inscription is reliable;

â€¢ What the “nationality” and the time frame of the inscription are and what Biblical person might be involved;

â€¢ How strong the match is with the biblical person.

The system contains a list of carefully calibrated gradations for coping with problems such as possible forgeries and illegal excavation of artifacts by thieves. The recent appearance in an antiquities market of an ossuary, a container for bones of the dead, with inscriptions indicating it might have belonged to Jesus’ brother James, is a high-profile example of a dramatic discovery that might be disqualified because of its murky past. A less-heralded artifact â€“ such as a coin that is datable because the location and subterranean layer of its discovery has been documented by reliable professionals â€“ can often be of far more value to historians.

Although minimalism is strong in Europe, fellow Near East scholar Paul Sanders from St. Stanislas College in Delft, Netherlands, praised Mykytiuk for a pleasant style that is cautious, consistent and easy as possible to understand â€“ a feat sometimes difficult to accomplish when a dissertation is revised into a book.

“Application of his criteria … will certainly play a role in future debate about the historicity of the biblical accounts,” Sanders wrote for the Review of Biblical Literature. “It should be read by all of those who are interested in the pre-exilic history of the kingdoms of Israel and Judah.”

Mykytiuk said his book would be of interest to both those who love and hate the Bible, historians of several schools of thought, including Arab scholars, and those simply fascinated by the exotic.

“My interest was historical,” Mykytiuk said. “If the question were ‘Should we believe in the God of the Bible?’ then that would be religious.” He said he nonetheless believes the identifications in his book will give 14 to 24 pieces of solid evidence to biblical maximalists.

“But minimalists will predictably try to minimize these, perhaps claiming that even 24 ‘bullets’ are not very many in a ‘war’ of ideas.”

Note to Journalists: Review copies of “Identifying Biblical Persons in Northwest Semitic Inscriptions of 1200-539 B.C.E.,” are available by request to Kathie Klein, Society of Biblical Literature marketing manager, at (404) 727-2325 or kathieklein@sbl.org.

ASI Newsletter May 2005 IN SEARCH OF NOAH’S ARK: Beware of ‘weak’ Ark claims