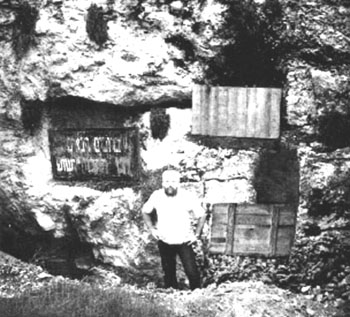 Comments on Chapter 16 from Holy Relics – I hesitated to even comment on this.

My first thought after reading chapter 16 was to skip completely any comments as if the chapter had never been included. It is one of the most absurd augments that could have been postulated, and reveals more fully the attitude and motive for which the whole book seems to have been written. This is not just another man’s opinion, but some kind of face saving, ego threatening, a Custer’s last stand at Big Horn scenario.

The essence of the issue brought forth was that because of similarities between that which is presented at the Church of the Holy Sepulcher, and what Wyatt found, that what Wyatt found must be false also.

O.K. let’s adapt that same thinking of the Authors, with the information we have on the anti-Christ power of Revelation 13. The anti-Christ power demands worship, (Rev. 13:8), The true God in heaven desires our worship, (Rev. 19:10), the anti-Christ reigned for 1260 days/years, the true Christ ministered for 1260 days, the AntiChrist received a deadly wound In 1798, the true Christ received a deadly wound at Calvary, the AntiChrist’s power is made up of an unholy trinity, (Rev. 16:13), The true God is a Holy trinity, (1John 5:7), etc.. If we follow the thinking of the authors how easily we could dismiss the true God as false, due to similarities, how utterly absurd!

Then there is this arrogant comment; quote, “We know that Ron Wyatt was not the first person to be guided by premonitions.”   WOW! How very perceptive and accurate the authors have been, since this describes a moment that just about everyone on the planet has experienced. But if you read the chapter the statement is couched in negative language that degrades and distorts. (If they only had a clue how God was leading His faithful servant!).

Near the end of the same chapter, the authors gain back just a little respect, they do raise a legitimate issue that needs to be discussed, that of the signs used to pronounce the crimes of the crucified. Quote, “there is one more claim that requires our attention. Ron Wyatt’s initial clue to the location of the correct crucifixion site was his discovery of three niches in the cliff face.”

Actually this was only one of the clues, Ron’s study of the area and particularly his research of General Charles Gordon’s excavations pointed him more in that direction. Even after his miraculous experience in the Garden Tomb, while walking with a member of the IAA, Ron upon arriving home, began his research as to why The Ark could possibly be in that area. He was always willing to do the research no matter how he felt. He was a mature enough Christian to realize, relying on his own feelings could be detrimental, he trusted more in prayer and the Holy Spirit, for guidance.   As a researcher he would always consider things from more than one perspective, there is no question that the niches are man-made, and chiseled from the cliff-face, the only question is whether they might have been used at the time of the crucifixion.

“A higher power than Pilate or the Jews had directed the placing of that inscription above the head of Jesus. In the providence of God it was to awaken thought, and investigation of the Scriptures. The place where Christ was crucified was near to the city. Thousands of people from all lands were then at Jerusalem, and the inscription declaring Jesus of Nazareth the Messiah would come to their notice. It was a living truth, transcribed by a hand that God had guided. In the sufferings of Christ upon the cross prophecy was fulfilled,” (DA 745). When Ron read this he knew there was more to the story than had been first presented. The road to Damascus ran right past the cliff-face, even today Nablus road is fairly close, which was part of the original road. Crucifixion was designed to be a deterrent to major crime, so the person’s crimes were listed also in the niches to publicly broadcast them as a deterrent. Visibility was a major consideration. The Nablus, (old Damascus), gate is over 100 meters, (328’) from the cliff-face, over the length of a football field. Ron realized that in order for God to accomplish His desire in publicizing His Son as the Messiah, much larger signs from the niches would have been the more effective way to accomplish this. The Scripture record of the event does not inform the reader that the normal procedure wasn’t followed.

For perhaps a variety of reasons the standard procession to the place of execution was not followed, under normal circumstances the criminal was bound to a split cross beam called the patibulum, the neck of the Sufferer was fastened within the patibulum, two horizontal pieces of wood, fastened at the end, to which the hands were bound.   The sufferer was then paraded through the streets, with a herald proclaiming, and holding a board listing the crimes of the sufferer. So, any in the crowded streets could both, see and hear the offenses. From the Scriptural record several of the normal procedures did not take place, though Christ was paraded through the streets. Christ had ministered to many of those same folks who would have been watching, they would have known that any allegations posted or proclaimed would be false, the Jews fearing any last minute reprisal I believe, prevented the normal process. Once at the place of the skull, it was Pilate who followed protocol and had an inscription placed not only on the cross, but I believe he utilized the niches, thus facilitating God’s intention to get the word out. A small labeling on the cross would in no way accomplish God’s purpose to proclaim His Son as the Messiah. So again, a misunderstanding of what God was accomplishing has caused short-sightedness. It is so easy to jump to conclusions with inadequate research and a spirit of criticism.

A Response to Holy Relics, 10-16 Eyewitness Testimony About Ark of the Covenant Video