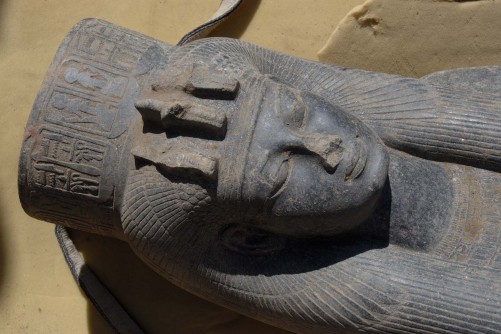 Newswise — A Johns Hopkins University archaeological expedition in Luxor, Egypt, has unearthed a life-sized statue, dating back nearly 3,400 years, of one of the queens of the powerful king Amenhotep III.

The statue, which dates to between 1391 and 1352 B.C.E., was uncovered Jan. 21 by the expedition’s director, Betsy Bryan, Johns Hopkins professor of Egyptian art and archaeology. Bryan and a graduate student, Fatma Talaat Ismail, were clearing a portion of the platform of the temple of the goddess Mut in Luxor, an area dating to about 700 B.C.E. The statue, which was lying face down in the ground, appeared to have been used as building rubble, Bryan said.

The statue’s back pillar was unearthed first and led Bryan to believe briefly that it dated from a far later period, since an inscription there was clearly made in the 21st Dynasty, about 1000 B.C.E., for a very powerful queen Henuttawy. 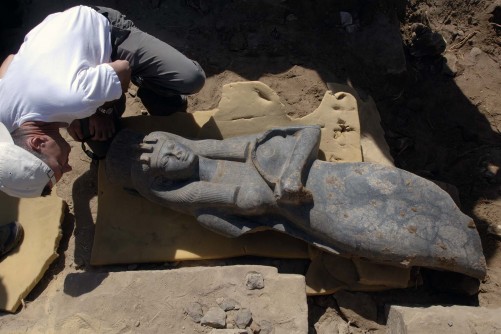 “The statue, however, when it was removed, revealed itself as a queen of Amenhotep III, whose name appears repeatedly on the statue’s crown,” Bryan said. She said she theorizes that perhaps this statue is of the great Queen Tiy, wife of Amenhotep III and mother of the so-called heretic king Akhenaten, who came to the throne as Amenhotep IV but later changed his name because of his rejection of the god Amen in favor of the sun disk Aten.

“Tiy was so powerful that, as a widow, she was the recipient of foreign diplomatic letters sent to her from the king of Babylonia in hopes that she would intercede with her son on behalf of the foreign interests,” Bryan said. “Some indications, such as her own portraits in art, suggest that Tiy may have ruled briefly after her husband’s death, but this is uncertain.” 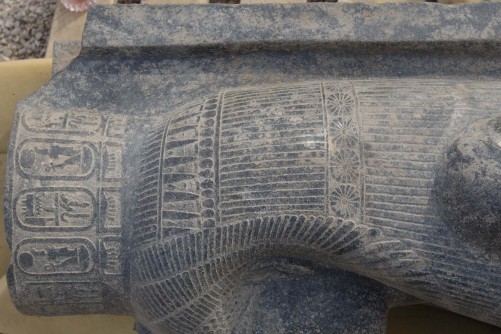 For reasons relating to inscriptions found on it, the statue of the queen definitely may be dated to the late years of Amenhotep III’s 38-year rule, Bryan said.

“The king did marry his own daughter, princess Sit-Amun, and made her his great royal wife as Tiy became more elderly,” Bryan said. “Thus the statue could also represent Sit-Amun as queen. Research on this highly detailed and exquisitely worked large-scale statue is only beginning. More story will be revealed.” 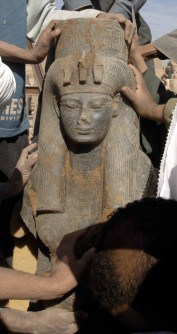 The discovery was made during Bryan’s 11th annual excavation at the Mut Temple Precinct, where she and her students are exploring the Egyptian New Kingdom (1567 to 1085 B.C.E.). The crew shares its work with the world through “Hopkins in Egypt Today,” an online diary featuring images by university photographer Jay VanRensselaer and captions by Bryan, detailing the day-to-day life on an archaeological dig. It is located at https://www.jhu.edu/neareast/egypttoday.html. The site will be updated to include details of this new find.

Lost treasures of Constantinople The week that Elvis died, August 16, 1977!