On the grounds of a Jerusalem national park with a view of the Temple Mount, a small group of
Israeli archaeologists and volunteers sifting through piles of rubble discarded by Islamic Wakf officials from the Temple Mount into a city garbage dump have recently uncovered a series of history-rich artifacts dating back to the First and Second Temple periods. 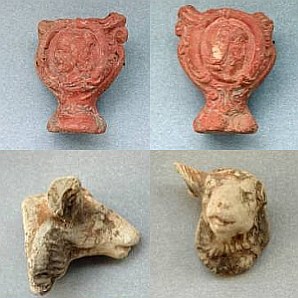 The five-month old privately-funded project underway at the site, which is being directed by Bar Ilan University archeology professor Dr. Gabriel Barkay, is being called virtually unprecedented since archaeological excavation has never been permitted on the Temple Mount itself.

Six years ago, following the Islamic Wakf’s unilateral construction of a mosque at an underground area of the Temple Mount known as Solomon’s Stables, Wakf officials discarded more than 10,000 tons of rubble with history-rich artifacts, at a municipal garbage dump in the Kidron Valley and other locations outside the Old City.

The November 1999 destruction and removal of the antiquities in the wake of the mosque construction was later called “an unprecedented archaeological crime” by the head of Israel’s Antiquities Authority, the state-run archaeological body nominally charged with supervision at Judaism’s holiest site, as well as by Israel’s leading archaeologists.

According to decades-old regulations in place on the Temple Mount, Islamic Wakf official administer the compound, while Jerusalem police are in charge of overall security at the site.

Straddled by political concerns and in flagrant contravention of the law, Israeli archaeologists from the Antiquities Authority have not been carrying out supervision for five years now at the bitterly contested site due to their concern about renewed Palestinian violence at the compound.

“The project should have been a government- sponsored initiative in coordination with the Antiquities Authority, but neither wanted to do it, ” Barkay said in an interview.

“The whole matter exposes the Antiquities Authority’s short-handedness in taking care of and protecting antiquities on the Temple Mount,” he added.

Starting in November, the archaeologist and a small team, led by his 32-year-old former student Zachi Zweig, transferred 68 truckloads of rubble saturated with archaeological finds from the garbage dump to the Emek Zurim National Park, on the western slopes of Mount Scopus. Using a mechanical sifter, the rubble was then separated into heaps based on size, before being hand-checked for antiquities.

Over the last five months, Zweig a small team of six workers — and an equal number of daily volunteers — who have sifted through 15 percent of the rubble to date have uncovered scores of history-rich artifacts, from the First Temple Period until today amidst the rubble, including a large amount of pottery dating from the Bronze Ages through modern times, a large segment of a marble pillar’s shaft, and over 100 ancient coins, among them several from the Hasmonean dynasty.

The one meter tall marble column, streaked with purple veins and white spots, is thought to date back to Late Roman or the Byzantine period, Barkay said, and is similar to column shafts near the southern wall of the Temple Mount.

The first coin recovered from the rubble was from the period of the First Revolt against the Romans that preceded the destruction of the Second Temple, he added.

The coin bore the phrase “For the Freedom of Zion,” and was particularly meaningful as the Temple Mount was one of the epicenters of the fight against the Romans.

Other finds include a spout of a Hasmonean lamp, an assortment of arrowheads, an ivory comb, a ceramic flask, various first temple figurines, and numerous pottery oil lamps.

The historical project underway is now in danger of going unfinished due to a lack of financial support, with the project director saying that the project will abruptly end in one week unless organizers receive urgent financial backing needed to complete the work.

Barkay said that he felt an unparalleled obligation to sort through the rubble to save what
was possible from the destruction of antiquities.

“The very act of spending time and making the effort to examine debris just because it originates from the Temple Mount transmits a very powerful message to the general public and to the world at large about the importance of the place,” Barkay said.

The work at the site was at first conducted primarily by volunteers who heard of the project by word of mouth. Soon, school groups, new immigrants — and both Jewish and Christian tourists — began stopping by to volunteer for work at the site, Zweig said, voicing the hope that someone will step in to ensure the project continues.

“It’s like touching history,” said archaeologist Vicky Mesestrano, a worker at the site.