Arutz Sheva (Israel National News.com) reports that archaeologists have “discovered a rare gold bell with a small hook at its end.” 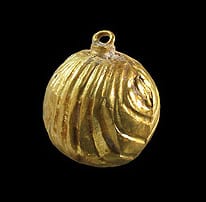 The directors of the excavation on behalf of the Antiquities Authority, archaeologists Eli Shukron and Professor Ronny Reich of Haifa University, said after the finding, “The bell looked as if it was sewn on the garment worn by a man of high authority in Jerusalem at the end of the Second Temple period.

“The bell was exposed in the city’s main drainage channel of that period, between the layers of dirt that had been piled on the floor of the channel,” they continued. “This drainage channel was built and hewn west to the Western Wall of the Temple Mount and drained the rainfall in the different parts of the city, through the City of David and the Shiloah Pool to the Kidron valley.”

The excavation area, above the drain, is located in the main street of Jerusalem which rose from the Shiloah Pool in the City of David. In this street an interchange was built through which people entered the Temple Mount. The remains of this interchange are what is known today as Robinson’s Arch. Archaeologists believe that the eminent man walked the streets of Jerusalem in the area of Robinson’s Arch and lost the golden bell which fell off his outfit into the drain beneath the street.

The full news report may be read here.

To read Ferrell Jenkins’ comments on the find, click here

First Person: The Bible as a Source of Testable Hypotheses In a Jerusalem tunnel, a glimpse of an ancient war