A Response to Holy Relics, Chapter 19 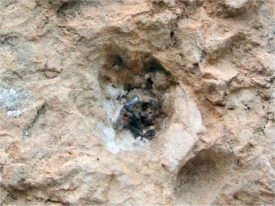 He who sits in the heavens shall laugh! These comments are based from chapter 19 of Holy Relics, From the Authors: quote, “Rev. John Woods noted, “I saw him [Ron Wyatt] explaining to a group that a piece of metal embedded in the face of the Garden Tomb was part of the seal Pilate had placed upon the tomb. In fact it was a piece of shrapnel from the [Arab-Israeli] war in 1967”.  (Randall Price, In Search of Temple Treasure, p.156, Harvest House Publishers, Eugene Oregon, 1994).  My response: AND WHERE IS THE REPORT??? Of course the authors are once again taking someone else’s word for things and not conducting their own research.

It could have been that Ron only supposed the metal in the wall was some type of pin to seal a first century tomb, I’ve seen it many times myself, it sure does look like part of a sheared off pin, like a 1st century tomb Jesus would have been buried in. Well, what a lucky guess, I’m sure by now many might be aware, that the metal has been tested, (Report was up on the Wyatt museum web-site) and I think I know why the Arabs lost the war in 1967, they were using 2,000 year old iron as ordinance??? This partial iron pin in the wall is from the first century, (wrong again Colin, wrong again Russell) what a surprise; the kings of the earth set themselves, and the rulers take counsel together, against the Lord and against His anointed, saying, Let us break their bonds in pieces and cast away their cords from us. He who sits in the heavens shall laugh; The Lord shall hold them in derision, (ps.2:2-4).

This is a short response to the main point in chapter 19, but what it demonstrates is the Authors attempt to overwhelm readers with all the supposed many things Ron Wyatt allegedly got wrong. Since they themselves conducted no due diligence how would they ever know what was correct? That’s right they don’t! All I see is a Pharisaical ideology at play to distort truth and mislead, God is laughing, but He is not amused and He will hold them responsible.