A Response to Holy Relics, Chapter 4 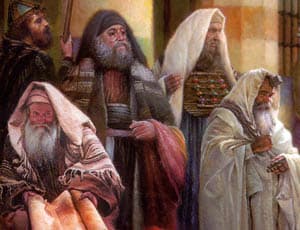 The context of Chapters 3 and 4 are dealing with deception as the chapter heading suggest. This is a critical subject for any Christian, and certainly one that cannot be ignored, and must be dealt with head-on. Also, as mentioned this is the number one concern of Christ in identifying end time events. It is true that Satan will do all within his ability to lead, especially God’s people, astray, he knows his time is running out. It is so amazing that folks in our country have so many Bibles in their homes, and yet one of Satan’s most effective ploys is to keep them from opening them. Christ warnings must be heeded; we must be vigilant, wide-awake to anything that would lead away from God’s counsel. Since the authors seem to have real concerns with Wyatt’s integrity, and credibility these chapters are filled with suspicion, and inferences that Wyatt is a deceiver, and thus his research material should be disregarded by the church. The one area that seems to be the main focus is the allegations of a visit from Christ Himself to converse with Wyatt. So let’s investigate the situation.

The first issue mentioned was whether Christ as our High Priest could ever leave the heavenly Sanctuary and re-visit the earth. The Authors begin with John’s imprisonment on Patmos, and conclude a personal visit from Christ was not possible;

“There are some passages in the Spirit of Prophecy which, if not read in the context of the full testimony of inspiration, have led some to conclude that Christ came down to earth and revealed Himself to the Apostle John. We cite five of these passages:” John was strengthened to live in the presence of his glorified Lord (Acts of the Apostles, p.582). Let every God-fearing teacher consider how most clearly to comprehend and to present the gospel that our Saviour came in person to make known to His servant John (Education p.191). The instruction to be communicated to John was so important that Christ came from heaven to give it to His servant (Seventh-day Adventist Bible Commentary, vol. 7, p.953). Christ visited him [John] in his exile (Testimonies for the Church, vol. 7, p.288). But though separated from his brethren, he [John] was visited by Christ (Review & Herald, May 16, 1899).

After reading all the quotes in context, plus others, I can categorically conclude that the authors are being disingenuous and selective, as to what they would choose to believe concerning the Spirit of Prophecy. The first quote was indeed referring to John being strengthened, while in vision. However, the remaining quotes, plus others, were viewed in their original context, not a compilation, and do indeed confirm that Ellen White was indicating that Christ came personally to visit His beloved Apostle John, the last survivor of the original chosen . One of the additional quotes comes from MS 179, 1905, (I’ve listed this because it was written just 10 years before Ellen White’s death), “The instruction communicated to John was so important that Christ came from heaven to give it to his servant, telling him to send it to the churches”.

Even though the authors were incorrect concerning Christ’s visit to John, they do make a point concerning any visit from Christ to Wyatt. The difference is the timing, when Christ visited John the disciple; He had not yet entered the Most Holy Place to begin the last phase of His ministry. His visit to John was only approximately 65 years after His ascension. Only before 1844, when Christ is pictured as entering the Most Holy Place, could He have appeared to John. With that said, we are still left with Ron’s claim that an Angle, or perhaps Christ Himself appeared to him.

The Scriptures offered by the Standishes from Matt. 24:23-26 actually have little to no relevance with Wyatt’s situation. Ron never invited or encouraged anyone to go to a certain place and see Christ, or suggest that Christ was in some secret place. In fact the context of these verses deal with the manner of the second coming, verse 27 concludes; for as the lightening comes from the east and flashes to the west, so also will the coming of the Son of man be, (so clearly they are using these verses out of context). It seems clear to me though, that Ron experienced an angel visit, and if you know the back story, it was so necessary at that time. However, I am also familiar with other encounters he had with angels, but from Ron’s perspective this one seemed different, this is perhaps why he indicated it might be Christ. I personally believe this was Gabriel, the covering cherub that stands before the Father, and on a mission of significant relevance. For God had called His Ark into service at the time of the crucifixion, and that information had been buried deep in the Scriptures, but now was the time for it to be revealed, Ron Wyatt would play a faithful role in opening that insight to the world.

Again, a lack of understanding from the authors, and perhaps a threat to closely held traditions, closes off the mind to what God is doing. As the authors major in the minors, and look at the speck in their brothers eye, but do not consider the plank that is in their own, (Matt. 7:3), damage is done to the cause of Christ. A point worth noting is that the discovery material, rather than leading folks away from God’s word, is in fact now in nearly every known language, having done more to further the cause of Christ than any denomination. If what is happening is not from God, it would have died out years ago. The Discovery research material supersedes denominational boundaries. Plus, it is accomplishing just what God intended, to confront a disbelieving world with the truth and relevance of God’s word. Wyatt knew he was on the front lines of a global warfare; a warfare for souls, and this is what motivated him to press on to the end, no matter the magnitude of criticism or hardship.