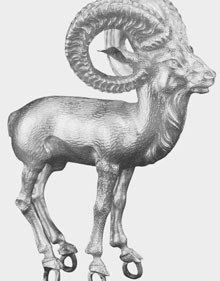 Findings from the royal Bactrian graves. A statuette of a goat (right), exquisitely fine work cast in gold, a gold ring engraved with a seated Athena and an inscription, and a gold clasp . These are just some of the 20,000 ancient pieces of jewelry Sariyiannidis unearthed at the site of Tilia Tepe in 1979 in what is now Afghanistan.  Victor Sariyiannidis has spent his life searching for traces of Greeks

When Victor Sariyiannidis discovered the 20,000 pieces of gold jewelry in 1979 in Tilia Tepe in Afghanistan — an area once occupied by the Hellenistic state of Bactria (Bactriana) — some thought he was just very lucky.

Some consider Sariyiannidis one of the most distinguished experts of our time, since after excavating with persistence for more than 30 years, he last year brought to light the cradle of the ancient religion of the Zoroastrians. The Zoroastrians lived in the Karakum desert in what was once the ancient kingdom of Margush, or Margiana, in southeastern Turkmenistan.

Today, Sariyiannidis, born 74 years ago in Tashkent, lives in poverty in Greece on a paltry pension from the farmers’ fund, which the Greek state granted him five years ago.

After an entire life spent excavating in Central Asia, he settled in Greece most of the year, living near his family — a dream he had clung to during the long, difficult years under Stalin. Then, as a young man, he was forced to hand over his Greek passport to Soviet authorities.

Despite his advanced years and some health problems, Sariyiannidis has not given up the fight. He says that as long as his strength holds out he will continue to fight for Greece to have a share in the management of the treasures excavated from the ancient Greek cities of Margush.

He met recently with Deputy Culture Minister Petros Tatoulis, who promised to continue allocating an annual 17,000 euros for the digs. Sariyiannidis recently left for his annual trip to the Karakum, where he stays for several months working with his local assistants.

We met him at his sister’s home in the Athens district of Kaisariani. Soft-spoken and humorous, he appeared to be in a hurry to get back to Turkmenistan.

Born in 1929 to a Pontic (Black Sea) Greek father from Trebizond and a Russian mother from the Crimea, Sariyannidis lived in difficult times for those who were not purely of Russian origin. He hung on to his Greek passport until he finished school and decided to study archaeology. The USSR told him to hand in his Greek passport or else forget about archaeology. He regretfully did so, and as a Soviet citizen, he completed his studies in Tashkent and in 1953 left for two years in Samarkand.

He soon returned to Turkmenistan where excavation was beginning at the site of the royal city of the gods and the temples in the Karakum desert.

It was hard work in arid, inhospitable country. None of his associates were really interested in the work, no one believed that a human had ever set foot in that desert. Only a few locals agreed to work with him for a small sum. The desert wind destroyed everything, and with meager supplies of food and water, they continued to search.

In 1969, Sariyiannidis went to Afghanistan to take part in the first joint Soviet-Afghan excavation in Tilia Tepe, in what was ancient Bactria, northern Afghanistan, a region that held many secrets but until then had not attracted the attention of archaeologists.

Sariyiannidis knew otherwise, not only because he knew the region, but because as a Greek he had been searching for traces of Alexander the Great. Three months of the year, from 1969 to 1978, he went to Bactria and worked hard in harsh conditions in the mountains, digging persistently along the course of the Amu Daria River.

His only ally was knowledge. He knew that it was in this part of Bactria that the Seleucids, the descendants of Alexander, had flourished. The Greek Euthydemus from Magnesia in Asia Minor led a Greek-Bactrian kingdom that reached as far as the Ganges and flourished until the middle of the first century AD.

Sariyiannidis arrived in this landscape of sandhills and flat desert in the winter of 1969 and began the search that was to lead in 1978 to the discovery of six royal graves filled with gold jewelry, 20,000 pieces of it, witness to the existence of an important civilization that was wiped out by the invasion of nomads.

“I was very lucky,” says Sariyiannidis today. “From the first time I set foot there I suspected that something was hidden behind those hills in the middle of the desert.

“The Russians have a saying that fools are lucky,” he continues. “During the digs that summer, the workers saw something shining. When I first realized exactly what we had found, I couldn’t sleep. I couldn’t believe it. Fortunately there were soldiers there who helped us guard the treasure. The first grave we opened was the humblest as the gold we found there were just small pieces. I realized their importance and began to count them. Every day we found 100-200 pieces of gold jewelry, small and large. We decided that the findings should not leave the area, and that is what happened.”

Now, he says that an archaeologist who finds gold is unlucky, since a rich excavation leaves an archaeologist without any friends. The envy of rivals led to the publication of articles denigrating the work. One article in Le Monde said that someone in Kabul had seen the Soviet army taking away originals and leaving copies behind.

However, the majority of archaeologists quickly recognized the value of the excavation and the sincerity of the archaeologist. Perhaps that was why in 2004 he was the only one invited to Kabul to determine whether the gold found in the state treasury were the originals and that nothing had been stolen by the Taliban.

In 1979 he left Bactria after war broke out and returned to Margush.

“Finally, after 30 years of hard work in extremely difficult conditions, in 2004 we found the home of Zoroastrianism, the world’s first known religion. We found temples, altars and a palace and gradually realized that what we had before us was exactly what was written in the Avesta, the Zoroastrians’ holy book — the temple of fire, water and the sacrificial altar — the Zoroastrians worshipped rain and fire and made sacrifices. As it appeared, in 2000 BC, tribes from different parts of the ancient world, particularly from northern Syria, were forced to leave their land because of a major drought that affected some parts of the world. They arrived at what was then the fertile delta of the Amu Daria River in southeastern Turkmenistan and settled there.

“On the banks of this river was where they built their capital, Gonur, whose huge palace had an entrance similar to that at Knossos,” Sariyiannidis says. “What was known about Zoroastrianism until that time was restricted to books. When we found the cradle of this religion, the temple of water built on a lakeshore, we had archaeological proof.”

In 1996 the Greek state began funding the excavation. When archaeologist Emilios Hourmouziadis visited, he suggested Greek students be allowed to join in the effort. “None ever arrived,” said Sariyiannidis. “Margush is only for the very hardy.”