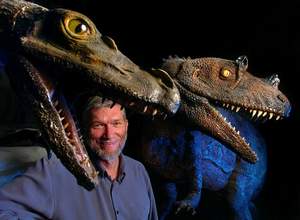 How and when did life begin? Ken Ham wants you to find the answer in his $25 million Boone County creation museum.

Ken Ham wants to save your soul.

He’s so bent on that mission that he has spent 11 years in Northern Kentucky creating a museum to answer one of the most debated questions of our time:

When and how did life begin?

Soon, visitors to Ham’s still-unfinished Creation Museum will experience his view: that God created the world in six, 24-hour days on a planet just 6,000 years old. This literal interpretation of the Bible runs counter to accepted scientific theory, which says Earth and its life forms evolved over billions of years.

Undaunted by considerable opponents, Ham’s Answers in Genesis ministry is building a $25 million monument to creationism. The largest museum of its kind in the world, it hopes to draw 600,000 people from the Midwest and beyond in its first year.

“When that museum is finished, it’s going to be Cincinnati’s No. 1 tourist attraction,” says the Rev. Jerry Falwell, nationally known Baptist evangelist and chancellor of Liberty University in Lynchburg, Va.

“It’s going to be a mini-Disney World.”

Ham sees the museum as a way of reaching more people – along with the Answers in Genesis Web site, which claims to get 10 million page views per month, and his “Answers … with Ken Ham” radio show, carried by more than 725 stations worldwide. That’s in addition to his talks around the country, the sales of books and DVD’s, newsletters e-mailed to 120,000 people and Creation magazine, which has 25,000 U.S. subscribers.

“People will get saved here,” Ham says of the museum. “It’s going to fire people up. If nothing else, it’s going to get them to question their own position of what they believe.”

He walks briskly through the privately funded museum, pausing at a life-size model of a 40-foot-long, 14-foot-tall Tyrannosaurus rex.

Ham, 53, appears far less ferocious – there’s a resemblance to Abraham Lincoln – but he is primed to fight, too.

“It’s a foundational battle,” he says, his Australian accent unmistakeable. “You’ve got to get people believing the right history – and believing that you can trust the Bible.”

Ham’s views of history and science are based on a literal reading of Genesis, the first book of the Old Testament. Among other things, he believes that:

Earth is about 6,000 years old, a figure arrived at by tracing the biblical genealogies, and not 4.5 billion years, as mainstream scientists say.

The Grand Canyon was formed not by erosion over millions of years, but by floodwaters in a matter of days or weeks.

Dinosaurs and man once co-existed, and dozens of the creatures – including T-rex – were passengers on the ark built by Noah, who was a real man, not a myth.

Although the Creation Museum’s full opening is still two years away, already a buzz is building.

Construction tours are being conducted daily,and even more visitors are expected after a cafÃ© and bookstore open later this year. Reporters from the British Broadcasting Corp. visited last week, and newspapers worldwide are flocking here to take a look, turning Petersburg into a ground zero of sorts for a culture war.

And yes, he says, that includes dinosaurs, the icons of evolution. Life-size models of dozens of the creatures will be on display in the museum.

Ham argues that evolution – the scientific theory that says life on the planet evolved from a common ancestor over millions of years – conflicts with the biblical version of a six-day creation. That, he says, has undermined the Bible’s authority, leading to a “relative morality” based on man, not God, and resulting in moral decay that ranges from racism and pornography to school violence and gay marriage.

Ham knows he has formidable opponents. Respected groups such as the National Science Board, the American Association for the Advancement of Science and the National Science Teachers Association strongly support the theory of evolution. John Marburger, the Bush administration’s science adviser, has said, “Evolution is a cornerstone of modern biology.”

Many mainstream scientists worry that creationist theology masquerading as science will have an adverse effect on the public’s science literacy.

“It’s a giant step backward in science education,” says Carolyn Chambers, chair of the biology department at Xavier University, which is operated by the Jesuit order of the Catholic church.

“Dinosaur-man co-existence is a non-issue,” he says. “And so, I believe, is the age of the Earth. It’s very clear the Earth is much older than 6,000 years.”

The debate reaches past science.

“I would hope the mainstream Christian community speaks up about this and says, ‘This is not the only Christian view,’ ” says Eugenie Scott, executive director of the National Center for Science Education in Oakland, Calif.

A spokesman for the Roman Catholic Archdiocese of Cincinnati said Archbishop Daniel E. Pilarczyk would not comment on the Creation Museum. A spokesman for Bishop Roger J. Foys of the Diocese of Covington referred questions to the Rev. Ronald Ketteler, chair of the theology department at Thomas More College.

Ketteler would not comment on the Creation Museum, either. But he says the Catholic doctrine of creation – which declares God as creator – is compatible with the theory of evolution.

The Rev. Mendle Adams, pastor of St. Peter’s United Church of Christ in Pleasant Ridge, has never hesitated to speak out against Ham’s views on science, theology and morality. In the mid-1990s, while pastor of a Northern Kentucky church, Adams opposed Ham’s plans for the museum.

“He takes extraordinary liberties with Scripture and theology to prove his point,” Adams says. “The bottom line is, he is anti-gay, and he uses that card all the time.”

Ham says homosexual behavior is a sin. But he adds that he’s careful to condemn the behavior, not the person.

In waging a culture war, Ham has a large number of potential foot soldiers.

Gallup polls since 1982 have consistently shown that about 45 percent of the U.S. population believes that God created humans in their present form sometime within the past 10,000 years.

Non-denominational and Baptist churches are the best prospects for developing relationships with the Creation Museum, according to a study commissioned by Answers in Genesis.

One well-known Baptist whom Ham can count on is Falwell. In July, Ham will speak at the 2005 Creation Mega Conference hosted by Falwell and his Liberty University.

“I consider Ken Ham the most informed creationist in America,” Falwell says.

Even detractors concede that Ham has appeal.

Ian Plimer, chair of geology at the University of Melbourne, became aware of Ham in the late 1980s, when Ham’s creationist ministry in Australia was just a few years old. “He is promoting the religion and science of 350 years ago,” says Plimer, but he adds: “He’s a far better communicator than most mainstream scientists.”

Still, even Ham admits he doesn’t always make a good first impression. He’s a shy man who wears a scraggly, graying beard, without a mustache, and doesn’t smile much, although he has reason to: Donations for museum construction are rolling in at a rate of $300,000 to $400,000 a year.

What’s more, the ministry he began in Northern Kentucky 11 years ago with colleagues Mark Looy and Mike Zovath now has 110 employees and a budget of $14 million.

“The Lord gave me a fire in my bones,” Ham says. “It’s almost as if … I have no option. The Lord has put this burden in my heart: ‘You’ve got to get this information out.’ “

Get Ham onto the topic of biblical authority, and his passion is obvious.

“He’d be speaking 20 hours a day if his body would let him,” says Zovath, vice president of museum operations.

Ham’s wife of 32 years agrees. “He finds it difficult talking about things apart from the ministry,” Mally Ham says. “He doesn’t shut off.”

Ham travels to about 30 cities a year to speak at churches, conferences and seminars. A couple of times a year, he addresses his home church, Calvary Baptist in Covington, and draws crowds of 1,400 or more.

“He’s one of the most popular speakers we have,” says the Rev. Dave Ellington, the worship pastor. “He reminds us to go back to what we really believe in the word of God.”

He grew up in a Christian home in Australia, the oldest of six children. His late father, a teacher and principal, taught him that the entire Gospel message depends on Genesis being true. Whenever a challenge to Scripture arose, the elder Ham stridently defended his faith, which had a great effect on young Ken.

Ham’s high school teachers introduced him to the theory of evolution. Concerned that it conflicted with the Bible’s creation story, he went to his father. The elder Ham didn’t have the answers, but encouraged his son to look for them.

Ham eventually found what he was seeking in the writings of creationist authors. Along the way, he earned a college degree in biology and environmental science, taught high school for five years, and spoke often at churches.

He and Mally, who have five children, built a room on the front of their house in Australia and started a bookstore, Creation Science Supply.

But his creationist ministry grew, and in 1979 he decided to make it a full-time endeavor.

Many of the books the Hams sold came from the San Diego-based Institute for Creation Research, which runs a small Museum of Creation and Earth History. The family moved to America in 1987, and Ham spent seven years at the institute, until he was pulled by the allure of building a ministry and museum in a more centrally located U.S. city.

Cincinnati and Northern Kentucky, home to an international airport and within a day’s drive of two-thirds of the U.S. population, fit the bill.

But will people come away believing the Earth is 6,000 years old?

Arnold Miller, a University of Cincinnati professor of geology, is an expert on the 450-million-year-old fossils commonly found around Cincinnati. A proponent of free speech, he says he’d never try to block the Creation Museum.

“What I would like, however, is for it to be understood that it is something based on belief, and not on science,” Miller says.

He muses that he could quit his job, become an expert debater, and take on Ham and other creationists.

“And if the general public were voting, I’d still lose,” he says. “I sometimes feel that it’s almost unwinnable. There’s a strong fundamentalist faith that many people have. I wouldn’t want to fight it.”

Ham, meanwhile, will fight. How will he know if he’s won?

On making a first impression: “People can think I’m standoffish or I don’t smile or I’m very serious. Once they get to know me, it’s very different.”

On the possibility of inviting public schools to visit the

Creation Museum: “We’ll try. Maybe we’ll invite some of the superintendents, and say, ‘We just want to show you what’s here. And you guys decide if there’s any way you can use it.’ It’s possible (administrators) might tell their students, ‘Don’t believe what they tell you, but let’s go see the dinosaurs.’ And we don’t mind that.”