A group of about 50 drawings of giant figures recently discovered in the hills of Peru’s southern coastal desert near the city of Palpa has been said to predate the famous Nazca lines nearby. 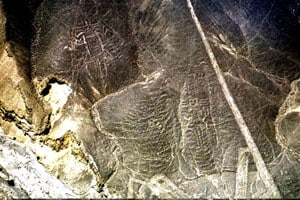 Mr. Johny Isla, director of the Andean Institute of Archaeological Studies, said the “geoglyph” figures appear to have been created by the Paracas communities between 500 and 400BC, whereas the Nazca culture developed after 50 BC. Mr. Isla and his partner Dr. Markus Reindel from the Dutch Institute of Archaeology discovered the Paracas figures using aerial photography and land-based surveys. The figures of humans, birds, monkeys and cats vary in size from 10m to 50m across, and are also grouped together in areas up to 60 m to 90 m across.

The Paracas figures were created by removing dark stones in order to expose the lighter surface underneath. Some areas were cleared and others built up with rock, creating figures in high and low relief. With the Nazca lines though, the geoglyphs were only made by clearing low-relief areas. Until recently scientists believed that the figures in the Palpa and Nazca regions were only from the Nazca culture. Mr. Isla says cultural dating and style of the newly found Paracas figures sets them apart.

Mr. Isla told The Epoch Times: “Most of these geoglyphs belong to the Nazca culture but our recent studies demonstrated that there are at least 50 geoglyphs pertaining to the Paracas culture. These new figures are definitely different and older than those of the Nazca culture.

Although the existence of some of the Paracas figures was previously known, most were undiscovered due to their remote location, and their visibility is highly affected by the position of the sun. One set of figures is known as the “Temple of Fertility” as one image represents a man, another a woman and the center image seems to represent a divine figure with a head from which emanates a series of rays that end in human heads.

Mr. Isla said: “The principal idea is that together the three figures represent the reproduction of the human species, the continuity of life.” “According to results obtained from our studies of the Nazca geoglyphs, we can suggest that the Paracas geoglyphs were made also in the context of a religious culture related to water. The Palpa and Nazca valleys are in the middle of one of the most arid deserts of the world, where the surface water is a vital resource to develop life,” said Mr. Isla.

Further studies may tell more about the Paracas people, their ways of life and early history of the area.