Ark of the Covenant Update: the Iron Spike 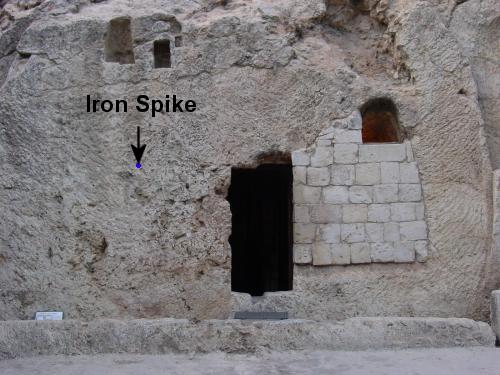 Many of you that have followed Ron’s Wyatt’s discovery of the Ark of the Covenant are also aware of his belief that the “Garden Tomb” is the place where Jesus was buried and resurrected. This tomb is in close proximity to the place where Ron began his dig for the Ark.

When Ron examined this tomb he noticed several things consistent with the story of Christ’s burial. One of those was what appeared to be an iron spike embedded in the outer rock face of the tomb.

It was his theory that this spike was the remains of the spike that was used to seal the tomb after the great round stone was rolled into place.

Since the spike was broken off even with the rock face, he believed that the spike was sheared off when the Bible says that an angel rolled back the stone at the resurrection of Christ.

The spike is located 71″ above the ground level within the trough made to hold the seal stone and 13 feet, 2 inches from the stop carved in the rock face to the right of the tomb. These measurements are consistent with the 13 foot, 1 inch diameter round stone, that Ron found during his dig, being the stone that once sealed the Garden Tomb. The picture above shows the location of this iron spike on the face of the tomb.

For years some of Ron’s critics have stated that this metal spike was nothing more than a piece of shrapnel from an exploded shell which hit the wall during the 1967 War. Although there was no evidence to support it, this story was repeated and published by numerous critics over the years. Well, finally the critics can be silenced on this point. 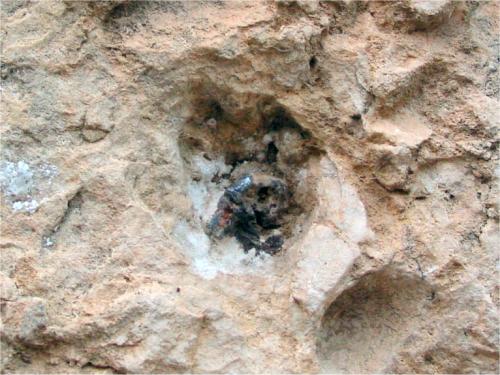 The Garden Tomb Association (GTA) and the Israeli Antiquities Authority (IAA) recently informed Anchor Stone that they had conducted an analysis of this object. Metal shavings were taken from the iron spike and tested. The results show that the metal contained in the spike is NOT of modern origin. This means it is not a fragment of an exploding shell!! While we must point out that the results do not prove Ron’s theory, they are consistent with it and the results definitely rule out the claims of the critics.

The test on the metal was performed by the IAA under the supervision of one of their archaeologists, Yeheil Zelinger. He will be publishing the details of the test in the near future. Anchor Stone will keep you informed when that happens.