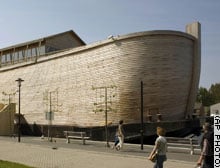 *SCHAGEN, Netherlands* (AP) — The massive central door in the side of Noah’s Ark was thrown open Saturday — you could say it was the first time in 4,000 years — drawing a crowd of curious pilgrims and townsfolk to behold the wonder.

Of course, it’s only a replica of the biblical Ark, built by Dutch creationist Johan Huibers as a testament to his faith in the literal truth of the Bible.

Reckoning by the old biblical measurements, Johan’s fully functional ark is 150 cubits long, 30 cubits high and 20 cubits wide. That’s two-thirds the length of a football field and as high as a three-story house.

Life-size models of giraffes, elephants, lions, crocodiles, zebras, bison and other animals greet visitors as they arrive in the main hold.

"The design is by my wife, Bianca," Huibers said. "She didn’t really want me to do this at all, but she said if you’re going to anyway, it should look like this."

A contractor by trade, Huibers built the ark of cedar and pine — biblical scholars debate exactly what the wood used by Noah would have been.

Huibers did the work mostly with his own hands, using modern tools and occasional help from his son Roy. Construction began in May 2005.

On the uncovered top deck — not quite ready in time for the opening — will come a petting zoo, with baby lambs and chickens, and goats. And one camel.

Visitors on the first day were stunned.

"It’s past comprehension," said Mary Louise Starosciak, who happened to be bicycling by with her husband while on vacation when they saw the ark looming over the local landscape.

"I knew the story of Noah, but I had no idea the boat would have been so big."

In fact, Noah’s Ark as described in the Bible was five times larger than Johan’s Ark.

But that still leaves enough space near the keel for a 50-seat film theater, where kids can watch the segment of the Disney film "Fantasia" that tells the story of Noah.

Another exhibit shows water cascading down on a model of the ark. Exhibits on the third level show ancient tools and old-fashioned barrels, exotic stuffed animals, and a wax model of an exhausted Noah reclining on a bed in the forecastle.

Genesis says Noah kept seven pairs of most domesticated animals and one breeding pair of all other creatures, plus his wife, three sons and three daughters-in-law together on the boat for almost a year while the world was deluged.

Perhaps it was only logical that the replica project would be the brainchild of a Dutchman: Fear of flooding is ingrained in the country’s collective consciousness by its water-drenched history.

Lois Poppema, visiting from California, said she thought the Netherlands was exactly the right place for an ark.

"Just a few weeks ago we saw Al Gore on television … saying that all Holland will be flooded" by rising sea levels, she said.

"I don’t think the man who made this ever expected that global warming will become (such an important) issue — and suddenly having the ark would be meaningful in the middle of Holland."

Under sunny skies Saturday, Huibers said he wasn’t worried about another biblical flood, since according to Genesis, the rainbow is the sign of God’s promise never to flood the world again. But he does worry that recent events such as the flooding of New Orleans could be seen as a portent of the end of time.

Huibers said he hopes the project will renew interest in Christianity in the Netherlands, where churchgoing has fallen dramatically in the past 50 years. He also plans to visit major cities in Belgium and Germany.