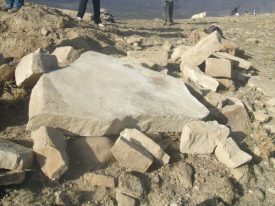 For a number of years now we have been wanting to explore the area above the final resting place of the Ark.  Back around 1998 Professor Michelson with his organization, SEPDAC, took a team into this area.  Since it is so close to the Iranian boarder, a military escort is normal protocol, so it’s usually off limits.

Initial investigations in ’98 revealed ancient stone foundations of buildings, and human remains. Now for the first time we get a real opportunity to see the extent of Noah’s first home,  we believe to be the first settlement after the flood. It is logical to assume that those leaving the Ark would settle in the immediate area.  A few years back on one of our excursions through the countryside above the Ark site,  we came across a large stone that resembled the altar stone at Arzep.  The size was almost identical, but the top of this stone had channels for drainage.  It appeared that this was an altar as well.

With the valley most likely still covered with flood water, this higher elevation was well suited for an immediate occupation.  An examination of these recent photos is proof that this area was well-established, and further examination will be exciting.  A number of artifacts have been retrieved, and will be thoroughly studied.   We will be back in the area this coming spring for further investigation.