We are extremely excited to announce that Anchor Stone has acquired a long-term lease from the Turkish government on the visitor’s center building located just above the Noah’s Ark site at Uzengeli village!!! Over this winter we will be converting this center into a Noah’s Ark museum with actual artifacts from the site and, with pending government permission, one of the anchor stones from Kazan. We are planning the Grand Opening for the spring of 2003. 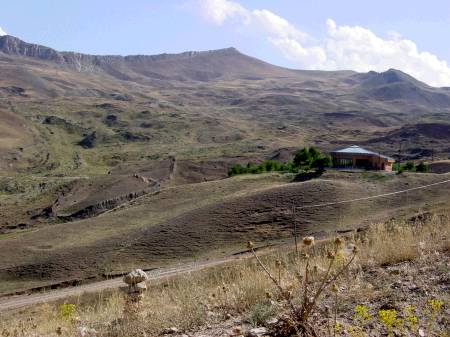 First, it will place a solid presence at the ark site during the high-season tourist months and will put the site "on the map" as far as the larger tourist agencies are concerned. Anchor Stone is working in coordination with Turkish tour agencies and these efforts are expected to at least quadruple the number of visitors to the site starting next spring. This means that many more people will be hearing about this Discovery. The current traffic is about 15-20 visitors per day during the season.

This project will also compliment the efforts of the Turkish Ministry of Culture which is in the final stages of their plan to fence in the ark site so it can be protected. My original understanding was that just the immediate site was to be enclosed. However, the latest information is that the entire area that was originally designated a "national park" will be fenced and protected.

The Turkish government has also contacted us saying that they want to commission the building of a scale model of the ark according to Ron Wyatt’s specifications which will be placed in the visitors center/museum.

As you can see the Turkish government is taking our work and this site more and more seriously each day. I really believe that Ron would be pleased to see this site finally getting some of the attention it deserves.

I am very excited about the prospects but there is much work ahead. Our first step is to get some badly needed exterior work done on the building before the soon coming winter arrives. Then we can concentrate on the interior work and the preparation of displays for the museum part of the visitors center. We already have a number of local Turkish volunteers to begin the exterior work. Some are donating their labor asking that we only pay for materials.

We have already begun the work on the displays for the museum part of the center. We estimate that the first phase of this work will cost approximately $25,000 USD.

Prior to my arrival in Turkey, work had been going forward on the new Noah’s Ark Center. But because of a rainy spring we were delayed by muddy roads in getting most of our supplies to the work site. But as of Sunday the weather has cleared and the work was fully underway.

Jobs like the new plumbing system and roof repair are now close to completion.

Workers are putting the final touches on the interior work and the furniture has arrived.

A text and graphic display for the museum has been brought from the USA and we will also be displaying samples of fossilized coral, petrified wood and pitch (bitumen) found at the site.

Because fund raising for this project was not what we had hoped we have had to scale back our plans but the center is now open. As funds become available we will add more to the center and upgrade our offerings.

The Center will actually be in two parts. The first will be the museum section which will contain a graphic display which will give a history of the ark site and orient the visitor to Noah’s Ark and the evidence developed up to this point. Later in the year we will be adding a video display.

The second part of the Center will be a small cafe where the visitors can relax and enjoy snacks and soft drinks as they take in the amazing view from this historic vantage point.

Update Newsletter March 6, 2003 ASI Letter to WAR Board of Directors