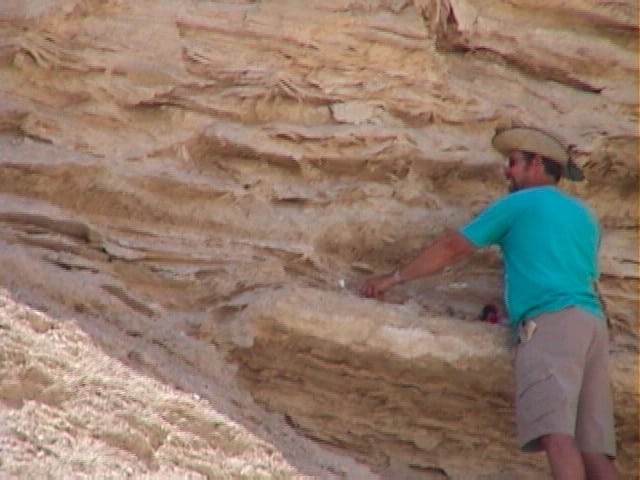 While spending a week in Israel meeting with people in regards to our current project in Jerusalem, Jerry Bowen and I had an opportunity to spend 2 days at the Dead Sea exploring several of the ashen cities of the plain including Sodom, Gomorrah and Zoar.

We found the usual brimstone (sulphur) and ash but while exploring along a vertical wall in Gomorrah Jerry made a very surprising and amazing discovery. Embedded in the wall about 40 feet above the present ground level and about 15 feet from the top he found a large number of medium-sized stones arranged in a definite pattern. They were laid out in a straight line parallel with the ground and arranged in a manner that suggested they were part of the structure of a wall. In the same area there is a good amount of brimstone peppered throughout the ash. 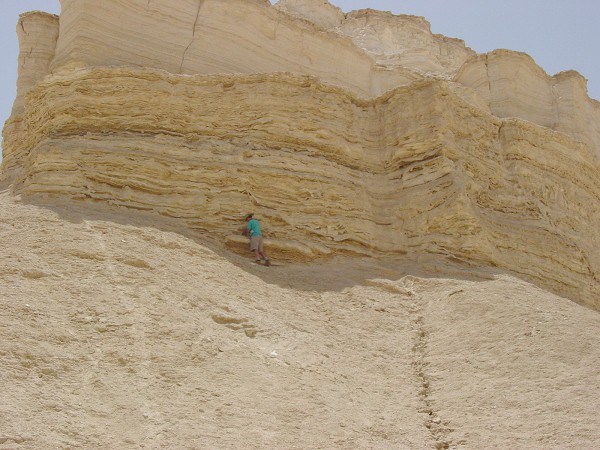 Here is how Jerry described it… “While examining one of the gully areas (a place where the loose ash that has fallen away from two formations forms a V-shaped trench), I noticed varying sized rocks, some quite large, lying as one would expect in the center of the gully. It would be possible, but unlikely, that someone could have placed these rocks in the gully. However once I reached the wall near the top of the gully I noticed a layer of varying sized rock still lodged in the formation. This 3′ high layer ran horizontally for 25 feet or more and the rock appeared to be in a pattern similar to that found in a foundational rock wall. 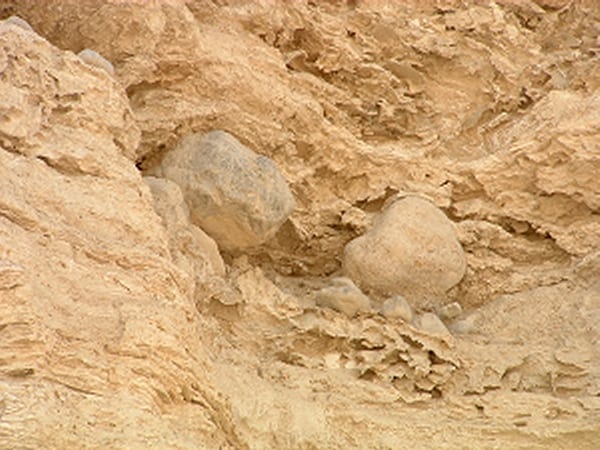 “As a licensed contractor there is no question that this was a deliberate construction of rock used for some foundational purpose. If it had not been for the erosion process which revealed to us a cross section of the formation we would never have found this additional evidence that these were manmade structures, as the rock foundation is well below the top of the ashen remains and 30′ above the existing road level.” 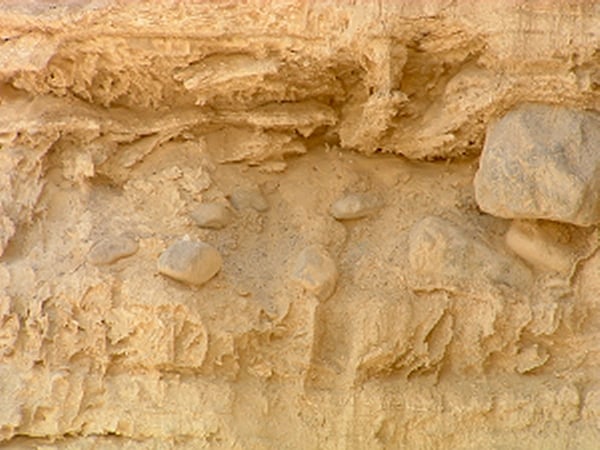 Many scientists take the position that the formations we were studying are actually sedimentary layers from a “playa” lake that existed in this area about 2 million years ago. However, I am not aware of sedimentary lakes laying down layers of stone arranged in a constructive foundational pattern. If indeed these stones were part of the sediment, because of their greater weigh and size relative to the the other “sediment” you would expect them to gravitate toward the bottom layers. But no, these stones all sought the same level and are more than 35 feet from the bottom layers of “sediment”. This is just one of several observations that can be made in these formations that contradict popular scientific opinion. 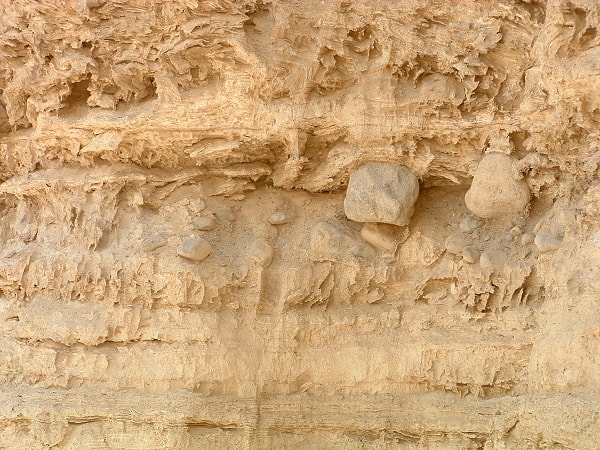 After Jerry pointed out the stones to me we took several photos which you can see on this page. The arrangement of the stones suggest a man-made design and many of them are darkened which suggests they have been exposed to varying degrees of heat. Some clearly show evidence of burning. These stones are just one more piece of evidence that correlates with the biblical description and which confirms that these are the ashen remains of Gomorrah.

Because of the numerous objections raised by critics of the discoveries, I am always on the lookout for anything that might raise a question. Then I look for a proper answer to those questions. On this trip, as I was examining the layers of ash in the remains of the cities of the plain, I noticed a number of thin bright reddish brown layers within the ash that appeared to be some type of iron oxide compound. This was somewhat troubling to me as I did not have a ready explanation of how such a substance could find its way into the ash of the remains of these cities. 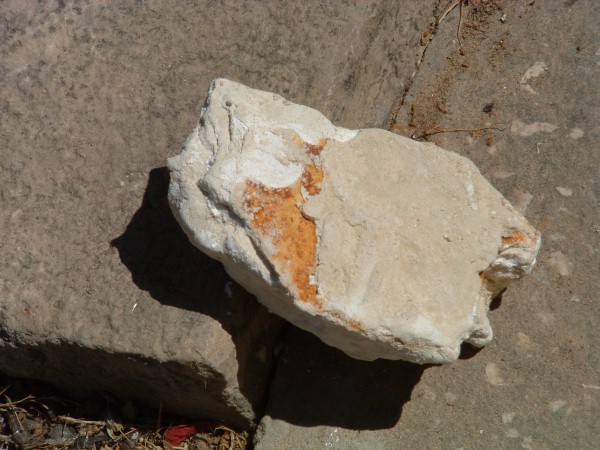 It was decided to take a couple of samples of this material and have it tested to determine what it was. But the lack of a clear answer to this question weighed upon my mind even after we were working on other projects in Jerusalem. Little did I know that God was about to help me work out this problem in an amazing way.

It is sometimes a struggle to find good food in foreign countries. In Israel this is only a problem when you get tired of eating falafel every day. On our sixth evening in a row of having falafel for dinner, Jerry suggested as we walked back from the falafel stand that we eat our dinner outside on the veranda in front of the hotel. I didn’t think this was a good idea and said so. I wanted to go to the room but Jerry insisted, saying that he wanted to sit in the sun for awhile. 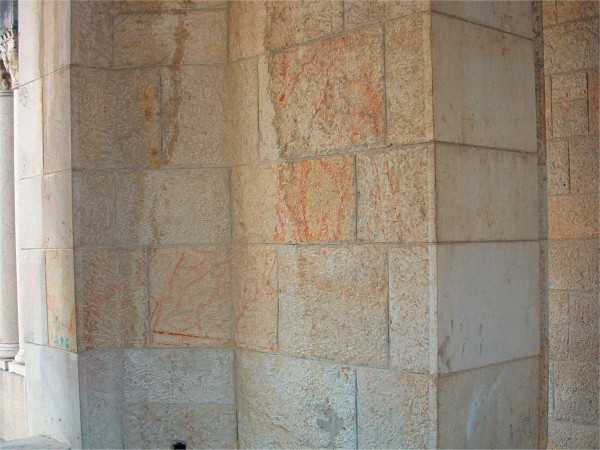 Being from Florida that idea did not appeal to me, so I decided to sit some 15 feet or so away from him under a little shaded alcove on the veranda. I found a table, pulled up a chair and sat down facing the stone wall some 3 feet away. I don’t know why I would choose to do this as the view looking towards the east was better. As I sat eating my falafel, wishing I was in the comfort of my hotel room, I began to notice something about the wall in front of me. This wall, as is the entire outside of the hotel, was built from limestone rocks cut to the shape and approximate size of concrete blocks.

As I studied the stones I suddenly realized that I was looking at stones made of the same material from which the cities of the plain were likely built. Looking closer I saw running through several of the stones and creating a reddish tinge to their color was what appeared to be the same reddish brown substance that I had seen days before in the layers of ash at Gomorrah. As I looked around I saw that about a third of the stones had this material on its surface in varying degrees and some stones had veins of the material running through them. 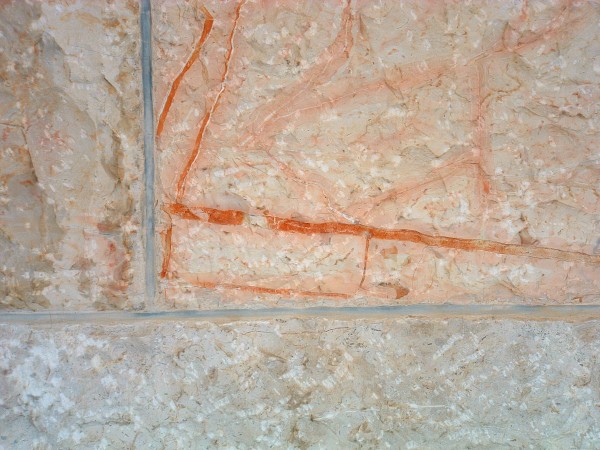 I pointed this out to Jerry and we spent the next hour filming and photographing these stones. As we examined the stones we realized that this substance is commonly found in limestone rock. Now we just need to test Jerry’s samples from Gomorrah to determine what it is, whether it is flammable and would the chemistry be consistent with being exposed to a brimstone conflagration.

What a coincidence (I don’t believe in coincidence in regards to this work) that Jerry just happened to suggest that we eat our dinner here and that I would grudgingly go along. Had we not done this I would have probably never noticed this characteristic of the limestone. Indeed…. “God has a way of working things out”.